It’s been another decent year of triathlon and running for me with some real breakthrough performances – I did a training summary last year so thought I’d do the same again for something to look back on in years to come. Firstly, the numbers;

In terms of races entered, the wallet has taken a bit of a battering this year. I’ve completed 3 marathons, 4 half-marathons, 5 10km races, a 10 mile and a 1 mile race. I’ve also done 42 5km parkrun events and 3 cross country races with my running club, Serpentine.

The first 3 months were all about the build up to the London marathon, so were mainly run focussed. Before the serious stuff kicked in I did allow myself a bit of ‘fun’ by taking part in the New Year’s Day triathlon in Edinburgh – how I didn’t end up with hypothermia after that I will never know.

February saw me take in two half-marathons; Wokingham and Tunbridge Wells. I took advantage of a really flat course and great running conditions at Wokingham to post a new PB of 1.23.10. March was just a case of knuckling down and getting the early morning training runs in to get to April in the best shape possible.

April was all about the marathon. 2 weeks before London, I took part in the Brighton marathon, which turned out to be my favourite race of the year by far. My long-term girlfriend Katie completed her first marathon, and I got to run every step with her, something I’ll never forget. One of my best mates Helen also completed her first marathon and it was great to share the journey with them. 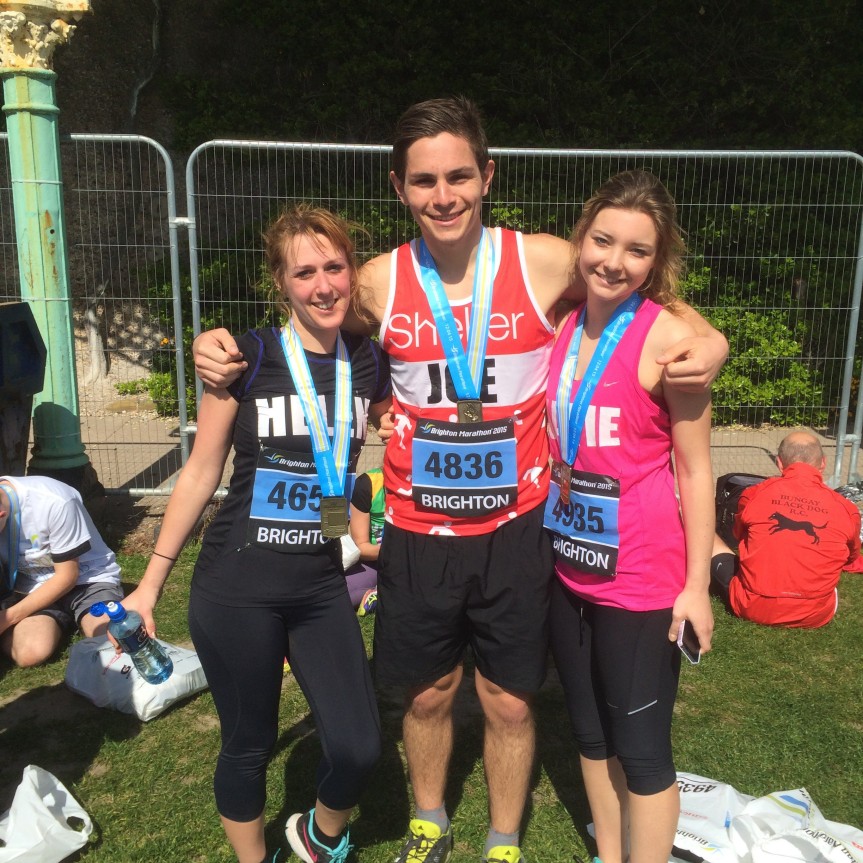 Two weeks after Brighton came London. I’d set my sights high, searching for a time of 3 hours and 5 minutes which would give me a ‘Good for Age’ time and automatic entry into London for the following two years. I also got to share the day with another one of my best mates James Bosher, and it was great to have a familiar face to hang around with in those nervous hours before the start. Unfortunately, I didn’t play out the way I wanted it to on the day, but I still came away with a 16 minute PB and a time of 3 hours and 13 minutes. 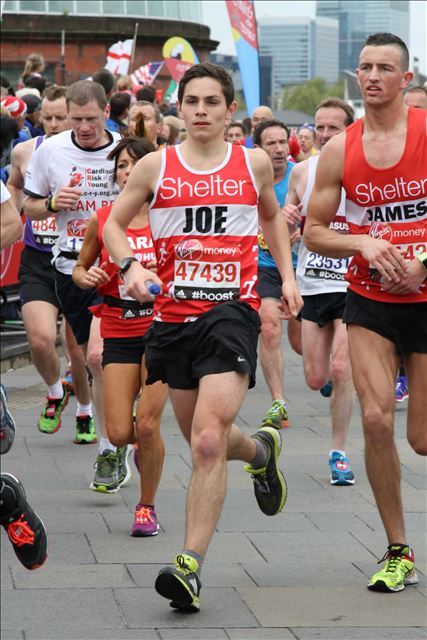 After a week or two off, it was time to think about triathlon. I tried to squeeze in as much biking and swimming as I could during may, before successfully completing my first half-ironman triathlon at the Outlaw half in Nottingham in absolutely appalling conditions. Exactly four weeks later at the end of June I knocked nearly half an hour off that time at the Grafman half-iron distance race, completing the race in 4 hours and 58 minutes, finishing 11th in my age group at the national championships.

July and especially August were about having a bit of fun combined with some down-time. In early July I managed to place 2nd overall in the Redericks Lake triathlon – something I definitely wasn’t expecting! After that team ‘BrownTown’ were reformed as Katie, Paul Brown, Bosher and I competed as a team at the Olympic Park relays, getting the chance to run round the Olympic track. At the end of the July me and 3 great mates took part in a 24 hour relay running race; even now I can’t decide if I loved it or hated it, but it was certainly something different! 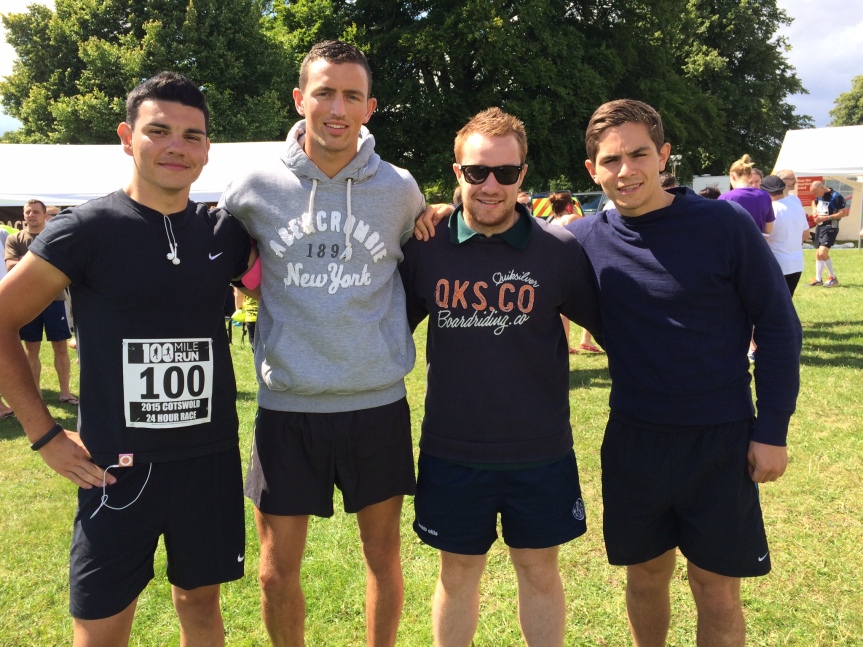 August was a break from training as Katie and I enjoyed a trip of a lifetime to the US. However, a holiday wouldn’t be a holiday without a running race, and we both ran the Giant Race – a 10km run in San Francisco. I didn’t do much running while we were away but certainly managed a fair amount of walking!

When we returned to the UK I decided to put myself on a short, sharp 8 week training programme to try and run another quick marathon. During this little spell of training I also ran the Great North run dressed as the Honey Monster which was such a laugh. Katie also completed her first triathlon as we joined Nick, Charlie and Paul for a weekend of racing at Hever Castle.

As you can see, I really ramped up the miles in October in preparation for the Thames Meander marathon in early November. My confidence had been boosted by a 5km PB at Brockwell parkrun the week before the marathon, recording 17.48, my first visit under 18 minutes.

Marathon day dawned and it was clear we were in for a tough day. Rain was falling by the bucket load and there were some pretty strong winds blowing down on the river. Fortunately, my good mate Bosher had agreed to join me yet again, and it was great to run the first half of the race with him and have some friendly company.

The second half of the race was probably the deepest I’ve had to dig in a pair of running shoes to date, and despite a brief ‘pit-stop’, I lowered my marathon PB by a further 7 minutes to 3 hours and 6 minutes, an agonizing 97 seconds away from my 3 hours and 5 minutes target. 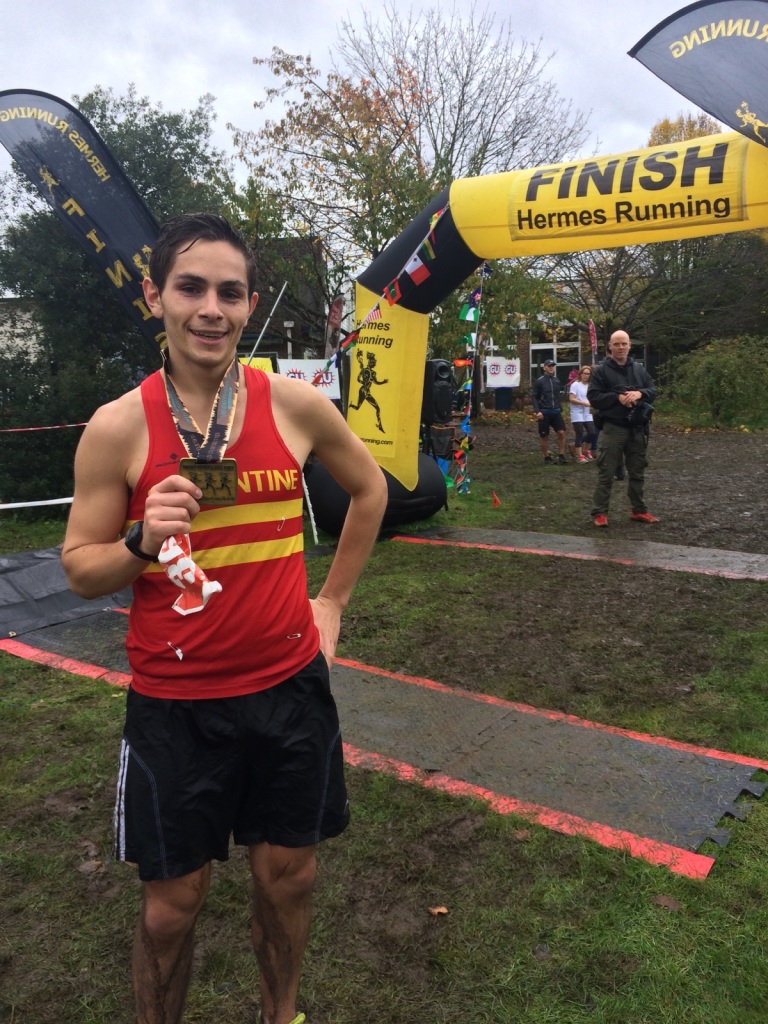 My legs were sore for a good 2 weeks afterwards, so I allowed myself a couple of weeks completely off running to prepare myself for one final attempt at a fast marathon before I turn my training focus more to multi-sport for the next couple of years.

Come the start of December I was raring to go again and posted my highest monthly total of all time by some margin, sticking intently to a high mileage 16 week training plan working towards the Barcelona marathon. The hard work already appears to be paying off, with a break-through performance at a 10km race in mid-December at the Olympic park, running 36.24, a PB of over 2 minutes. The year was finished off nicely with the notoriously tough ‘Gut Buster’ 10 miles race in Berkshire, where I finished 8th overall, up from 22nd the previous year.

To be honest, I feel slightly tired just reading all that! It certainly hasn’t been a year for taking it easy (people that know me know I’m not very good at sitting still). However, I still feel like I’ve a way to go to reach my potential, and the motivation now is stronger than it’s ever been.

So what is 2016 currently looking like? At the moment, it’s all about the Barcelona marathon in March. I’ve nailed my flag to the mast – I want that sub-3 hour marathon, and at the moment I’m trying to everything that is physically possible to get it.

After a little break after Barcelona, there’s the small matter of Ironman Zurich in July – something I’m so excited about I can hardly contain myself. Katie, Bosher and I also have a spot in the Berlin marathon in September, so we’ll be having a trip to Octoberfest in the autumn!

I’m really excited about the upcoming year, as I feel like I’ve got tonnes more to give. I’m just hoping to stay injury free and compete to the best of my ability – we’ll just see what happens.

(If you want to subscribe to the blog, you can click on the link on the right hand side at the top the home page and you’ll get an e-mail every time I post!)