Who had the clever idea of racing a half-marathon 3 weeks after the biggest race of my life? For probably the first time in my relationship with Katie, it was her leaning on me to sign up for an event. Naturally, I’m never going to turn down an opportunity to run, so the Reading half marathon was penned into the diaries a few months ago; the chance to have a bit of ‘fun’ post Barcelona.

This was never going to be a priority event for us, so focus on preparation was minimal. We both ran Wimbledon parkrun the day before the race (and as usual, I got slightly carried away and probably ended up running too fast – 7th), before catching the train out to Reading in the afternoon. Luckily, Katie’s parents live just outside Reading so we had the chance to stay with them the night before and get a lift directly to the start – ideal, and much appreciated.

We also had the luxury of being ‘VIP’s’ for the day – courtesy of Mizuno, one of the race sponsors. Katie had entered a competition as she wore Mizuno trainers, and as such we were invited into a special reserved area at the football stadium in Reading (where the race starts and finishes). Here, we received free photos pre and post-race, an exclusive bag drop, a free massage, and most importantly, exclusive access to our own indoor toilets! Proper toilets, not those rubbish portaloo’s. What a dream.

This made for a more relaxed race morning as we could hang out inside and stay warm before ambling down to the start with about 30 minutes to go. Unfortunately, upon arrival at the start we were greeted with the news that it would be pushed back 15 minutes. Slightly annoying, but no real issue – I bumped into a couple of people I knew and we chatted away until it was time to get going.

I’d been put in the very front ‘wave’ of runners, based on the predicted time I submitted when I signed up. There were about 300 of us in this zone (mostly lanky, fast looking men), and I remember thinking it would be a good idea not to get caught up in all the excitement at the start, and set off too fast. Hmm. That sounds like a familiar comment doesn’t it. Don’t worry though, surely I’ll have learnt my lesson and I won’t set off at an unrealistic pace at the start. After all, I’ve got the hang of this running lark now, haven’t I?

With aspirations of running under 80 minutes for the first time in a half-marathon, I set off like a man possessed. Reading is marketed as a flat, fast course. It is pretty flat, but there are certainly a few bumps along the way. The first two miles were certainly hill free (5.53 and 5.58), before hitting a couple of nasty inclines (that’ll be the third mile in 6.13 then). 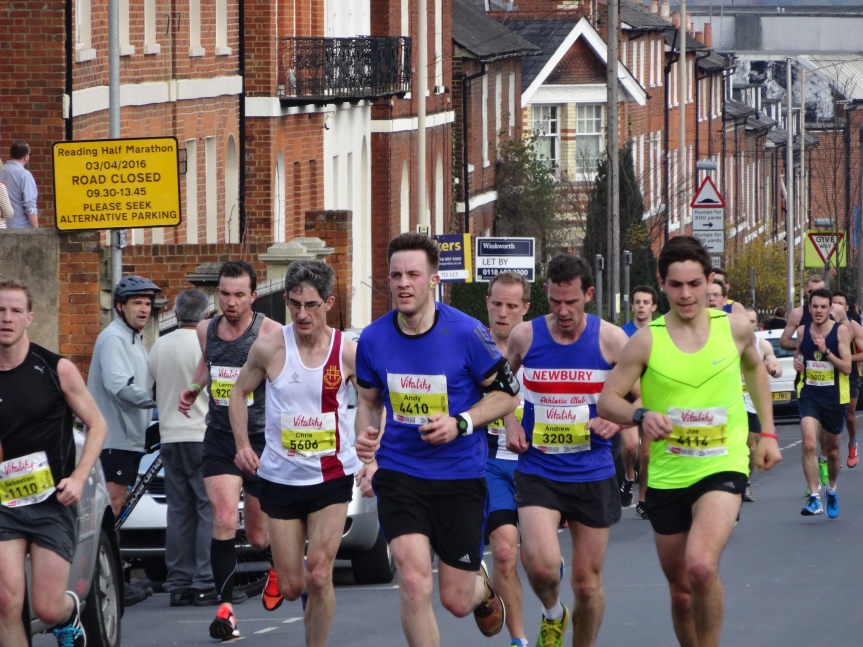 After cresting the top of these two, it’s mostly a gentle downhill into the town centre from the next few miles. Despite this, I knew I was in a spot of bother – the pace felt more like something I could hold for 6/7 miles rather than an entire half marathon. I was encountering a strange sensation – my mind was telling me to slow down but my legs just kept turning at the same speed. Every mile marker I went through told me I was still running at 6 minutes per mile.

This had to come to an end at some point, which it did, as the route made its way through the town centre. We were about halfway through the race and I was already suffering in a big way, and despite plenty of support from the large crowds, I just couldn’t keep my foot on the gas. My legs slowly started losing power and the 6 minute miles quickly became 6.15s and then 6.30s. 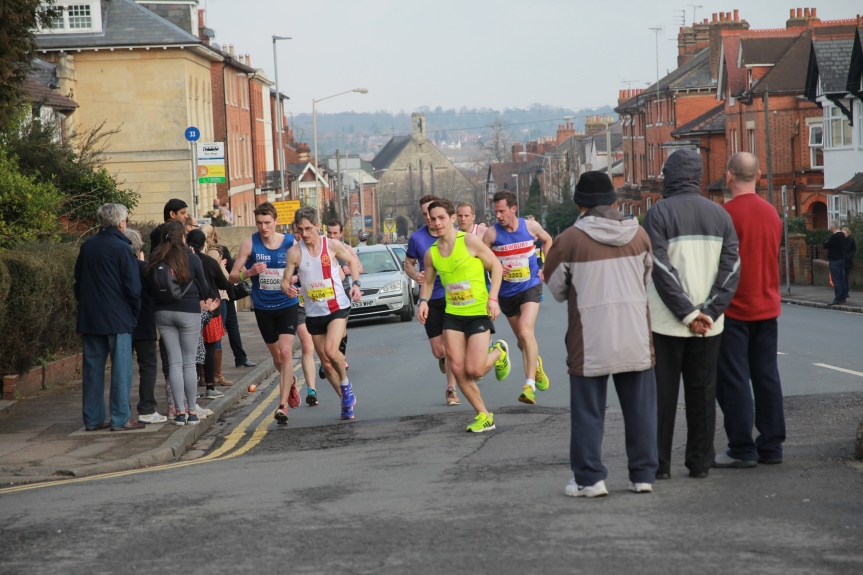 Shortly after mile 8, there’s another nasty little climb away from town, but I knew Katie’s family would be at the top so tried to hold the effort up and over this. After an average attempt at trying to look happy for a photo (unsuccessful), my face set back into the grimace like state it had been in for the majority of the morning. 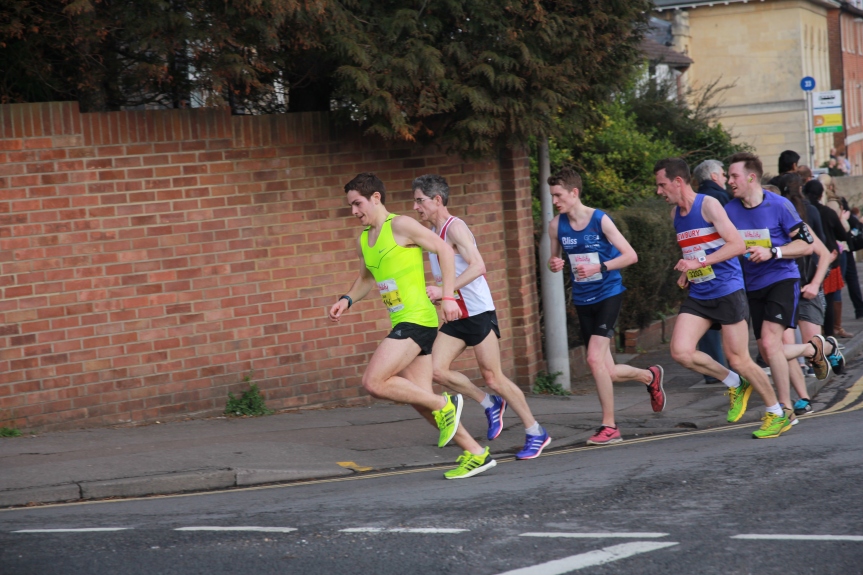 It was having a raging internal argument with myself. The sub-80 minute time was slowly slipping away, but if I could struggle through the remaining few miles I’d still have a personal best and a half-decent time. So despite my brain screaming at me to stop running, I soldiered on in my own personal little world of pain.

Having run this race two years previously (it was actually our first event we went to together as a couple), I knew the last couple of miles were along a fairly bleak, long, straight dual carriageway. By this point, I was just concentrating on getting from one mile marker to the next in the shortest time possible, instead of thinking about the bigger picture re; how many miles left. To top it off, we had a nice little headwind to run into for this last section.

The mercury was also rising, and while it wasn’t quite the Sahara desert, it was quite hot for an early April morning in Berkshire, and I was certainly feeling a little flustered by the heat. Looking back, I think it may actually be the most I’ve ever suffered during a race, and I was not in a happy place for those closing miles. Still, all good mental practice for the upcoming jaunt in Zurich.

I can safely say I’ve never been so pleased to see a football stadium in my life, as the Madejski stadium loomed large in front of me. After running around the outside for a while (are we ever going to turn in?), I eventually saw the gap we ran through to hit the last half lap of the pitch. The atmosphere inside was excellent, but at the time all my thoughts were on getting across that line so I could finally stop running.

I mustered a rather pathetic ‘sprint’ finish, before taking a few minutes to compose myself before being able to stand properly again. The clock had stopped at 1.21.01, a personal best of 2 minutes or so, but not quite the 1.19.59 I’d have liked. Still, 191st out of around 11,000 runners isn’t too bad for a morning’s effort.

After guzzling a few litres worth of fluid, I wandered back down the course to spot Katie and shout some support. She looked good (as always – apart from Barca), finishing in 1.48, looking like she’d just gone for a walk in the park. 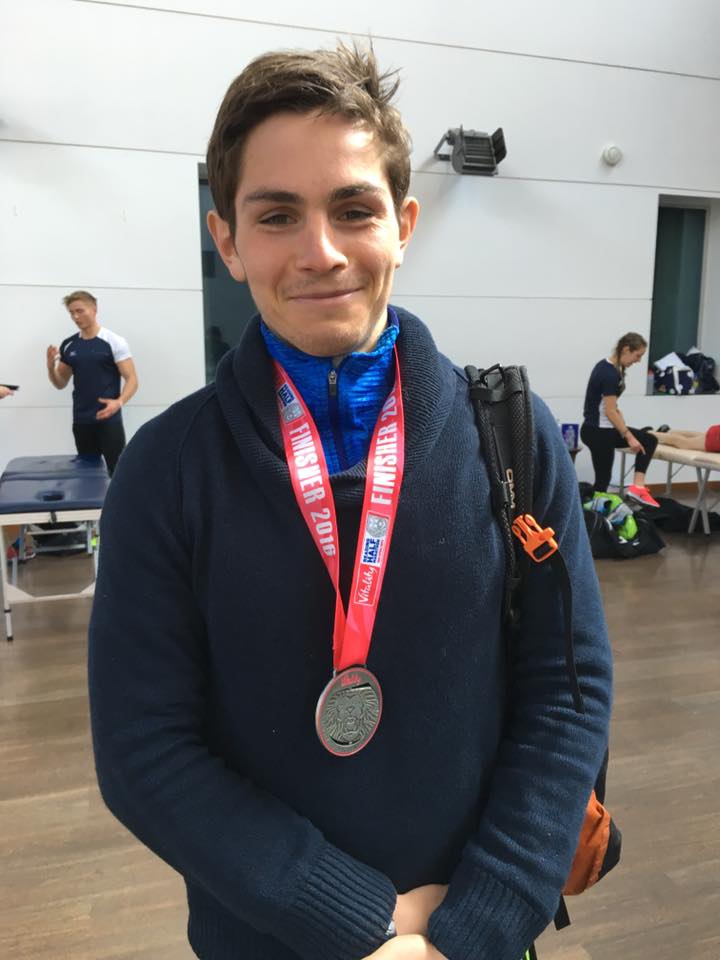 I think all the efforts of the previous weeks caught up with me on Sunday. In the immediate aftermath of the marathon I’d run two hard 5kms and done a large amount of swimming and biking. I’d also managed to put on about half a stone in the weeks after the marathon – ‘catching up’ with all the eating and drinking I’d missed out on during training. Despite this, I’m happy I gritted it out when times got tough, as I can’t imagine this is the last time I’ll face some dark times during a race.

Today marks day 1 of my 16 week ironman training – a nice little recovery/rest day. Unfortunately, I don’t think every day is going to be as easy as this one.