This is the final installment of my Ironman journey (some of you will be relieved to hear). If you haven’t already seen them, check out pre-race, swim, bike and run.

Once I crossed the line, I was handed a little towel and my medal was placed round my neck. I’ve collected a few over the years, but this one for sure will be my most precious – I’ll always remember the hours and days I put in to come away with it. The medal is great as well.

I was utterly exhausted, dehydrated but still grinning from ear to ear. I immediately sought out my family and emotional sweaty hugs were dished out like they were going out of fashion. I kept telling them that I couldn’t believe I’d actually done it.

After a quick catch up I headed into the ‘athletes village’, an area at the end of the race where only those taking part were allowed to enter. This place was awesome. I shared a shower with a few of our friends from the continent, before grabbing myself a free beer and jumping in one of the many hot tubs – I had one to myself. 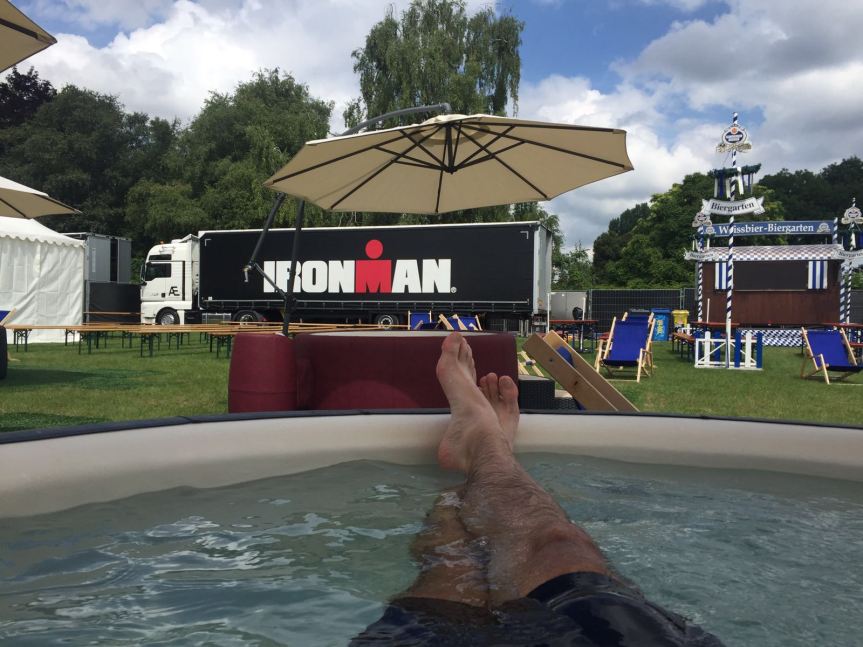 With my legs wincing at the thought of a free massage, I headed straight for the food tent. Everything was free, and I managed to consume 2 full sized pizzas, 2 portions of chips and a burger in the space of half an hour. I sprinkled in some crisps and nuts to suppliment this, along with another couple of beers. Perfect recovery fuel.

During my eat-a-thon, I got chatting to another Brit I’d met before the race – Paul Burton. I’d heard him interviewed before on a triathlon podcast I listen to, as he’d qualified for Kona (the Ironman world championships) the previous year. It was great to meet him and hear some of his stories. He’d also managed to secure a qualification spot for this world championships with a quite incredible time of 9 hours and 25 minutes, just a few weeks after doing another ironman in Austria. What an absolute legend.

After I’d finished demolishing the free food on offer, I headed back out to hang out with Katie and my family. We stayed around until it got dark, watching the final finishers come through whilst drinking a couple of beers. Some of these guys had been on their feet for nearly 16 hours – what an absolute inspiration. Althought I do think Dave got slightly sick of hearing ‘(Insert name), you are in Ironman!’ 5,234 times.

From here I limped back to the hostel, having already dropped my bike off with ship my tri bike to take home for me (although unfortunately when they dropped it off in the UK they didn’t have my bag with cycling shoes in amongst other bits, which I still haven’t received back). You’d have think I’d have slept like a log that night, but the adrenaline was still pumping and I only managed a few hours.

The following day, we packed up our stuff as we were heading to Lucerne for a couple of nights for a bit of post race recovery/holiday. I couldn’t resist swinging by the event site on the way to the station to pick some finishers stash (justifying the spend with ‘you’ll only ever have one first ironman’). The days that followed were awesome – eating loads of food, drinking beer and relaxing by swimming in the lake and wandering around taking in the sights.

Post race I didn’t feel too bad. I had some muscle soreness, but my biggest issue was that by soaking myself with water during the run, my wet shorts had managed to chafe away a large part of my undercarriage, causing a significant amount of pain. This could have been alieviated with some good moisturiser – unfortunately Scrooge here refused to pay the ridiculous price for a small tube in the worlds most expensive country.

It was with a heavy heart that I boarded the plane at Zurich airport, the situation made worse by the fact that we were flying back to Luton, quite possibly one of the worst places on planet earth.

I’ve had time to reflect on how I think the day went. I’m really happy with the way the swim and bike turned out, and I know I still have loads of room to improve my cycling. The run for me was the most dissapointing part as I know I’m better than that, and with some changes in my nutrition plan I’m sure I can nail it in the future.

The experience itself was unbelievable – everything I hoped it would be and more. I had an idea that this probably wouldn’t be the end of my ironman journey before the day itself, but wanted to see how it panned out – I might have hated it. I think the question now is not if I’ll do another one, but when, and where. Watch this space.

Long distance triathlon can be quite an individual sport, but there’d be no way I could do it without the support of others. I think I’ve bored my mates to death with chat about split times and aero-bars, but they’ve always pretended to be interested, and followed the journey from start to finish, even if I’ve had to miss a social event now and then – legends.

My family have been amazing with all their support – both the guys at the race on the day as well as everyone else back at home tracking me on the day. Knowing that everyone was behind me provided a real boost during some of the darker moments.

The one hero in all of this though has been Katie. She’s been so understanding and supportive of both my training and racing throughout the year and had to put up with a lot, especially when I started to get wound up in the weeks leading up to the race. I’m really lucky to have someone in my life who is so supportive of what I do, even if it does means an early night or five during the week. Hopefully I’ll return the favour with tips and support when she signs up for her first ironman.

When I started writing this blog (nearly 2 years ago!), I gave it the title ‘Road to Ironman’. This no longer seems appropriate, so I’ll have to get thinking about a witty new name. I know there’s been a lot of speculation in the press about whether this will be the last you hear from me – there’s no cause for panic, the reports will keep on coming, don’t worry!

Ironman had always been a long term goal for me, something I’d wanted to do for years. Zurich has shown me how tough the sport can be, but I’ve come out the other side with even more motivation to improve and slowly make my way up the leaderboard. Who knows, one day, with a bit of hard work, it could be me qualifying for the world championships in Hawaii. I’m sure plenty of people would be up for a little holiday. 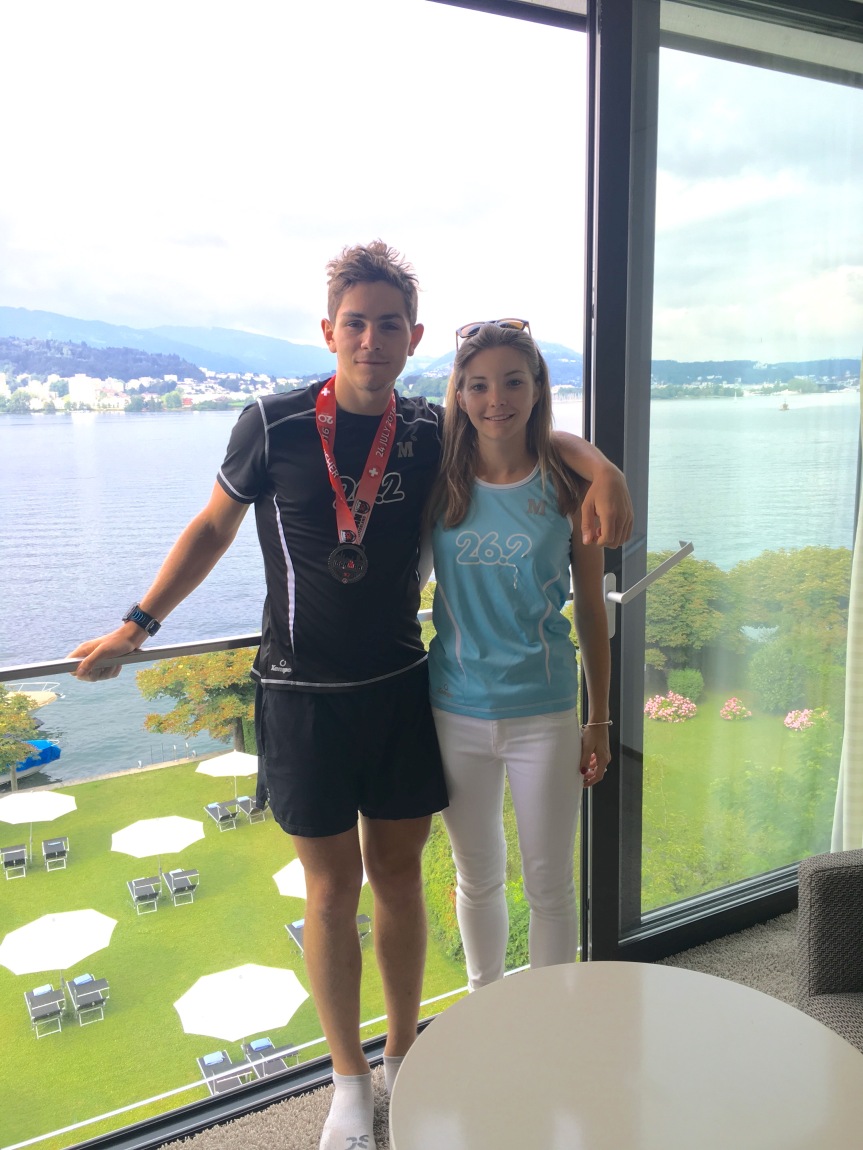 That feeling of knowing that everyone has your back, but no one can save you from what’s happening, no matter how much they want to 👎🏻
6 months today.
There’s life in the old dog yet. Broke the hospital VO2 max record - the cardiac specialist was absolutely buzzing. There was me thinking my record breaking days were over.
Training for a Spring marathon? Know someone who is? Want a free hug from race director Flat Cap Spraggz as you cross the finish line? Then come join the fun.
Friends that agree to have an ice bath dinner party are friends worth having 😘🧊🥶
👋 2022. See ya never. Spent a year lying in bed wondering if I was actually going to make it to the end. But here we are.