New Year’s Day is usually spent lounging around in bed for a few hours before dragging yourself out for a walk or down to the pub for a couple of drinks to try and stave off the impending hangover.

This would’ve sounded like a dream day for the old me. Unfortunately for my family and long-suffering girlfriend, I’m now addicted to exercise and love to test myself in races as often as possible. I suppose there are worse things to be addicted to. So with the memory of 2 years ago banished to the back of my mind, I’d again signed up to the annual triathlon in Edinburgh that takes place on the 1st of January.

The 31st was a Saturday and therefore it would’ve been rude not to parkrun, so Katie and I headed off to Cramond with my Mum and Dave in tow. A brutal headwind saw my attempt at a fast time unravel in the second half of the run, clocking 18.07 – over 30 seconds slower than 12 months previously. This took more out of me than I’d anticipated, with the legs feeling pretty heavy for the rest of the day.

We went out for a slap-up meal in the evening, cumulating with a delicious Nutella, mascarpone and pancake combo – unideal preparation but it’s all just a bit of fun really and sometimes there are more important things in life than running (did I just say that?).

Race morning dawned and there were doubts as to whether we should parkrun (for about all of 2 seconds), but with the race not starting until midday we had bags of time to head down to Portobello. Dave and Mum competed the spectating/chauffeuring double-header which was greatly appreciated, especially as it wasn’t warm.

Meaning to take it real easy, but quickly getting carried away as ever, I ran faster than I should’ve, coming home comfortably under 20 minutes. Again, it’s all a bit of fun so I wasn’t too concerned – I just called it a decent warm-up for the main event later on.

After a quick bit of porridge back at home, it was time to get myself to the Commonwealth pool, where the event is held. I hopped on my bike for the short spin over, before racking it up in transition and sorting out my gear – not having as much as usual as it was only a sprint triathlon.

Swimmers are set off in ten second intervals, and as I was number 370 of the 400 or so entrants, I had a good hour to wait after the first swimmer set off. Thankfully, the pool was gloriously warm and surrounded by rows of seating, so I stretched out and watched the early starters make their way up and down the pool.

With about 15 minutes to go I had a quick warm-up swim in the diving pool – being able to do this before a triathlon is an absolute luxury, especially as the water was pretty toasty. Swimmers were lined up in numerical order along the poolside, so I found my spot and shuffled forward in the line towards the start. I’d swam 5 times in the past 4 months, so certainly wasn’t expecting to have a great swim.

The start required a dive into lane 1 of the 50m, before making your way along before heading back in the adjacent lane. 8 lanes of this made 400m. I’d never dove in to start a race before, so I was going in blind. Quite literally, as when I hit the water, my goggles flooded with water and I couldn’t see a thing. I flapped around in what I thought was a forward direction, resolving to adjust them at the end of the first length. After a bit of wrestling with the lane rope along the way, I got to the end and removed them before adjusting and setting off again.

The rest of the swim was much less eventful, I paced it reasonably well and tried to pick up the speed on the last couple of lengths. I was actually enjoying the swim for once, mainly because it wasn’t in a freezing cold lake and only 400m long. I hauled myself up the steps and out onto poolside a good minute and a half quicker than 2 years ago, but I’ve still got big improvements to make in the water.

It was out from the sanctuary of the pool to the bitter cold that is Scotland in January. I’d swam in my sleeveless tri-suit and my feet were already freezing after running on the bare concrete to my bike. I made the stupid decision of not putting on my jacket or gloves as this would just waste time, so just threw on my shoes and socks, grabbed my bike and ran to the mount line.

It’s worth noting I nearly halved my transition time from two years ago when I’d forgotten how to put a t-shirt on. 24 months of practicing getting dressed had paid off – good training time well spent.

Despite the course being a hilly one, I’d brought my new time-trial bike as I was desperate to give her another run-out. There was 3 circuits of Holyrood park to complete, and I flew down the first descent past Holyrood palace, quickly finding myself at the bottom of the climb which takes up around a third of the lap.

With the bike only being 16km, the tactics were that there were none, just ride as hard as possible and just keep pushing. As one of the last starters I was constantly passing people and there was a bit of weaving to do be done as I made my way through the field. At the end of each lap I got a chance to see the family and gave them the manic grin which usually signals all is ok. 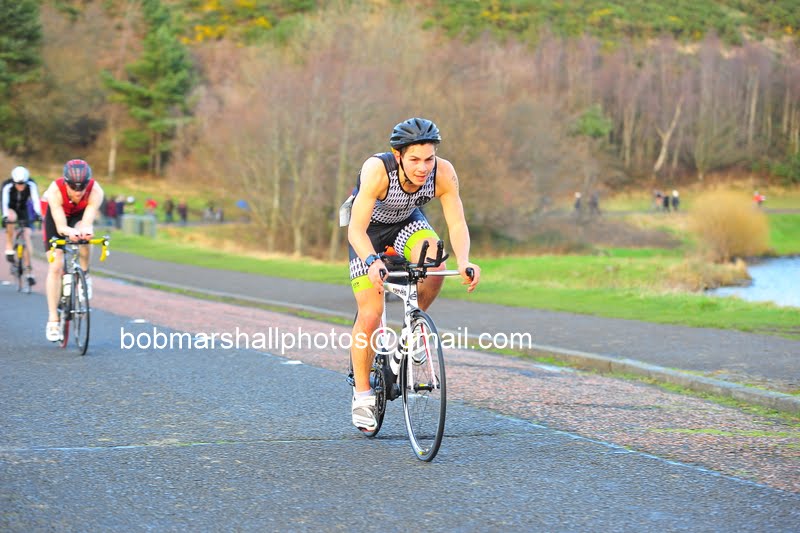 By the half-way point I was seriously regretting not putting any gloves on, and my feet had turned into two blocks of ice. Still, I’m not sure why I was expecting any different on the 1st of January in Edinburgh, and only had myself to blame for dressing like a tool.

I slogged my way up the climb for the 3rd and final time before rolling down the other side back towards transition. At this point I had no idea how I was doing – no-one had come past me but I didn’t know if the guys that started after me were slowly gaining time on me.

I ended up with the 5th fastest bike split of the day, a significant improvement on the 81st position last time out and a positive result considering I feel like I’ve got so much improvement still to make on the bike.

My main issue in transition two was being unable to feel my feet and a complete loss of control of my hands. I racked the bike easily enough, but really struggled to slip my shoes on as I couldn’t get my thumb behind my heel. After I’d made a meal of this I started to run out of transition with my helmet still fastened. I tried to unclip the strap but as my fingers couldn’t feel anything, I couldn’t locate the fastener. After a good few seconds had ticked away, I slipped the strap over my chin and used my teeth to undo the clip. Hardly a textbook transition, but eventually I was on my way.

Despite not being able to feel my feet (which is a very surreal sensation when you’re running), the legs felt ok and I set off at a hard pace, knowing the first mile was slightly downhill. There were loads of people in the park on their New Year’s Day making the run a bit of an obstacle course but generally everyone was great and got out of the way in plenty of time before they were steamrollered by me.

The route was exactly the same as the bike, but just a single lap instead of 3, so the route didn’t throw up any surprises. I just concentrated on catching and passing as many people as possible, not having a clue what position I was currently in. When I found myself flagging, I thought about people behind me that may be putting time into me, which helped spur me forward.

Half way round the lap I fell into stride with another runner (Simon) and we encouraged each other up the final climb and towards the finish. As we came back down the hill I pulled away and made the turn off the loop into the last 400m. The legs and lungs were burning now, I just gave it everything I had finishing with a final sprint, happy that I’d given it my best shot.

I was pleasantly surprised to learn that I’d had the fastest run of the day (by a good 20 seconds or so). I’ll have to attribute it to the pink sweatbands I received as a secret santa present – they’re clearly good luck and will have to make further appearances in the future.

After collecting my medal and a bottle of water I quickly headed back into the warmth of the pool, where I found the support crew queuing for a much deserved hot drink. That’s twice I’ve subjected them to a chilly January afternoon spectating, and they were brilliant even if I can never understand a word Mum says when she shouts during the race.

We’d joked earlier in the week that I was a perennial fourth place finisher, but Dave seemed to think I may have finished in the top ten. I headed off to see if I could find the provisional results. Entering my race number into the system, I was told I’d actually finished 3rd. Refusing to believe this could be the case, I assumed that others that were yet to finish would be faster than me, so I waited a while and then tried again. Nope, still 3rd.

We now had the welcome problem of having to hang around for a bit before the awards presentation, so we grabbed another drink and sat around chatting while the organisers got themselves sorted. After calling my name in 3rd place, I was presented with some prize money – that’s definitely never happened before!

I had a good chat with Graeme, who had finished second overall, and we swapped training and racing stories. Turns out he’s also for London, so hopefully our paths will cross again in the near future.

I’ve got to say it was a very unexpected 3rd place, but surely a good sign for the season to come – considering I’ve literally done zero biking or swimming in the last 3 months. I’ve got 7 months until my next ironman, so training starts in earnest from now. I can’t wait.

That feeling of knowing that everyone has your back, but no one can save you from what’s happening, no matter how much they want to 👎🏻
6 months today.
There’s life in the old dog yet. Broke the hospital VO2 max record - the cardiac specialist was absolutely buzzing. There was me thinking my record breaking days were over.
Training for a Spring marathon? Know someone who is? Want a free hug from race director Flat Cap Spraggz as you cross the finish line? Then come join the fun.
Friends that agree to have an ice bath dinner party are friends worth having 😘🧊🥶
👋 2022. See ya never. Spent a year lying in bed wondering if I was actually going to make it to the end. But here we are.