Katie (my long suffering girlfriend) has written a much shorter, funnier report on what really went down this year at Ironman UK. I’ll get my coat…

I don’t normally do this kind of thing, but I thought I could make an exception for a small achievement. England didn’t win the World Cup, but one Englishman I know had an above-average Sunday.

The day started at 3am for Joe while I took the leisurely option of 3.20 (it was a Sunday after all). We went to bed earlier than your great-great-grandparents but I felt like neither of us slept a wink. I was so nervous, and when I’m nervous about something, sleep just doesn’t happen. This race has been spoken about more times in our household than literally anything else. No-one in the history of the world has been as obsessed with the humble town of Bolton as my boyfriend.

As much as I take the mick out of him, he has trained extremely hard for this for months and has had his fair share of bad luck in races previously so I was just praying he would get the day he deserved. And that I might get a step closer to the holiday in Hawaii that I obviously deserved.

The roads were actually quite busy; full of taxis taking normal people home from their Saturday nights out. However we arrived at the swim start with (literally) hours to spare. Those who know Joe know that he is a man who is never late. More accurately in fact, he is never not early.

Joe headed into transition to mess about with bottles/bikes/portaloos while I headed straight to the dodgy-looking burger van to get my first caffeine hit of the day. (Side note- they were already selling burgers and hotdogs by the tonne. At 4am. To hungry IM supporters. Madness.). We bumped into lots of Chasers at the start, both supporting and doing. I was so excited to see how they would all get on! A special mention to Naomi who was the smiliest triathlete that morning.

As a seasoned triathlon supporter, I never miss the swim. Thousands of nutters launching themselves into a cold, dirty body of water at 6am is an amazing site. And before anyone else asks me, no it does not make me want to do one; I’m happy watching with a 6/10 cup of tea.

Once the swim was under-way I bumped into Jen, Adam, Cathryn & Ed. Adam is a great person to watch the swim with, mainly because he actually knows about swimming and explains to me what is going on. On this particular occasion, there was a lot of “feet-following” going on. I’m told this is normally fine, except when the feet you are following are actually doing a zig-zag instead of a straight line. The marshals in kayaks were struggling to keep the all the rogue swimmers in line; it was pretty chaotic.

Martin was the first to complete the swim, shortly followed by Joe. It can be difficult to spot ‘your’ triathlete coming out of the water because everyone wears the same hat, goggles, and a predominantly black wetsuit. However I can always pick out Joe immediately as he is the crazed-looking one galloping his way up the ramp. A little less “Baywatch”, a little more “hungry Labrador running towards it’s dinner”.

Joe is a great runner and is becoming pretty nippy on the bike but his best discipline by far is transition. If ripping off a wetsuit was a sport of it’s own, Joe would be an Olympian. A swift 3 minutes later he was off for a long and eventful cycle. I watched the other Chasers finish the swim, all looking really strong. Stage 1 – done.

The cycle is a long old way in an Ironman, and normally I am training for some sort of running event so I take this window to fit in a long run. I found a canal nearby and did an 18 miler. It’s easier doing a long run knowing there’s thousands of other people close-by doing something much harder. It also makes you feel slightly less lazy compared to them.

I don’t deny the fact that I think Ironman are money-grabbers but at least they have invested some cash in a decent tracking app. It never crashes and gives frequent updates on pace/position/location etc. However I should also mention that throughout the day I was in constant communication with the famous Paul Burton. He’s a demon triathlete himself but is also the world’s best triathlon-analysis-stats-genius. PB puts the tracker to shame. He was giving me better updates and predictions on how Joe was moving through the field.

And moving through the field he certainly was! He moved from 10th in AG to 2nd during the course of my run which is by far the best I’ve ever seen him do in a bike leg. He’s done hundreds of hours of cycling this year and it has definitely paid off (he also didn’t get 5 punctures a la Outlaw which speeds things up significantly). There was also some rolling around on a car bonnet or something but Joe’s barely mentioned that so I don’t think it was a big deal.

After my very unglamorous post-run “clean up” in Morrisons car park (wet wipes, deodorant, fresh t-shirt) I made tracks into Bolton town centre to watch the run. As always, my plan on the run is to get to the furthest away points where spectators are normally sparse as I feel this is where people really need and appreciate the support.

I joined forces with another PB (Paul Brown/Brownie) on our bikes to head up that horrible, long out & back section of the run course. After a intense wrestling match with my jammed bike chain I got myself (now covered in bike oil) out of Bolton town centre and up the road.

Like the swim exit, it can be very difficult to spot ‘your’ triathlete on the run as they all seem to choose the same trisuit (can you all stop buying that black and white Huub trisuit please?). Despite this, I have no real issues here either. Anyone who has ever seen Joe run will know what I mean when I say “Is it a bird? Is it a plane? No, it’s Spraggins on the run”. See below. 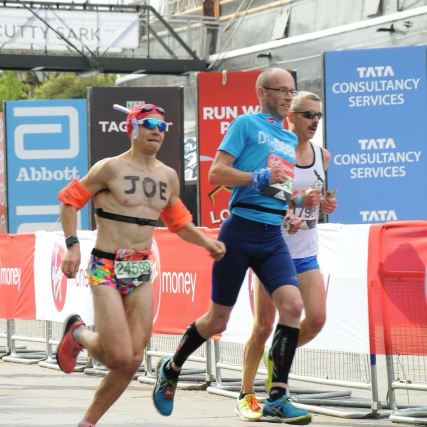 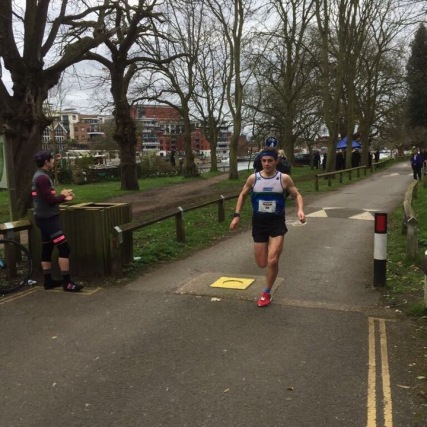 Anyway, I saw Joe a bunch of times on the run. Below are the main occasions I remember in detail:

At 5km I spot Aeroplane Man flying towards me. Great! He’s safely off the bike and is currently 2nd in Age Group. He’s looking pretty springy, this is awesome. As he approaches, I start shouting the usual motivational things but also check, ‘are you ok?’.

Rather than give me any further information, he just flies away again. Hmm. Slightly worrying but at least he’s in one piece.

About 4 miles later I see him again. I have been having in-depth conversations with PB about progress. He concluded that Joe is doing well, but he’s only 10km in and needs to stay calm, stick to the plan and not get ahead of himself. There’s also a slightly worrying 3rd place chap running very well (whom we will not mention to Joe just yet).

Anyway, Joe bounds up like an excitable puppy, grinning from ear to ear.

Facepalm. This is exactly what I did not want to hear and I think my response may have surprised a few other supporters near me.

*If you didn’t get that reference, it can be translated as “I’m feeling amazing, and a Kona qualification spot is mine. Pack your bags, we are going to Hawaii”.

More chats with PB, and with 3rd place catching up, he has given me lots of things to say to JS. Brownie and I were having a great time chatting and laughing at the locals using the Ironman as a perfect excuse for a massive Sunday drinking session. But when Joe came past this time I transformed myself into serious-intense-coach-mode.

“Right 3rd is running slightly faster than you, he’s gradually making up the gap so dig in. 4th has blown up, he’s going backwards, you might go to 3rd but you’re safe there. Keep drinking. Don’t waste all that training. Oh and PB says something about Superman and aubergines.”

“Ok great thanks, are you guys alright? How did your run go?”

The greyhound in 3rd had eaten Joe up by this point, and he was in a terrible way the next time I saw him around the 20 mile point. This is by far the worst part of any marathon, let alone an Ironman marathon.

This time Brownie and I made a mad dash back to dump our bikes and get to the finish in the town centre. I’ve got to mention the heat at this point. I really felt sorry for all the runners slogging it away in temperatures in the high 20s. I was really dehydrated after my run that I can only imagine how hard it must’ve been for them all.

When Joe came round that final bend I genuinely cannot believe how happy (and relieved) I was. I shouted so loudly I actually scared myself. He was in 3rd. And after 5 years of talking about Kona, I knew we were finally going. 6 months ago, he would have been very lucky to qualify but the hard work and consequential improvements he has seen over the past 7/8 months have really propelled him up a level.

He’s always trained hard but Paul Burton has channelled all that energy in the right direction. He takes no shit and Joe does as he’s told. And it bloody worked! So well done to Joe, but PB is the brains behind the operation. I am very very proud.

We split the rest of the day between the med tent, pub & finishing line. All the other Chasers did amazingly well, and also made me super proud. Naomi you are my hero. The other supporters were also on top form (Jen, Adam, Cathryn, Ed, Gaby, Bryn, Gemma, Gemma, Justin, Melanie, Dave & Ross). Ross is number 2 on the triathlon-analysis-stats-genius ranking (after PB).

Thanks also to Brownie for keeping me company, I’ll bring better snacks next time I promise (although boiled eggs and peanuts are a treat, no?). The biggest thank you though is definitely to Gemma and Justin who let us stay with them. Their whole house was taken over by triathlon kit and they were definitely woken up at 3am by us (despite being too kind to admit it). These two are just awesome and we are lucky to know them. 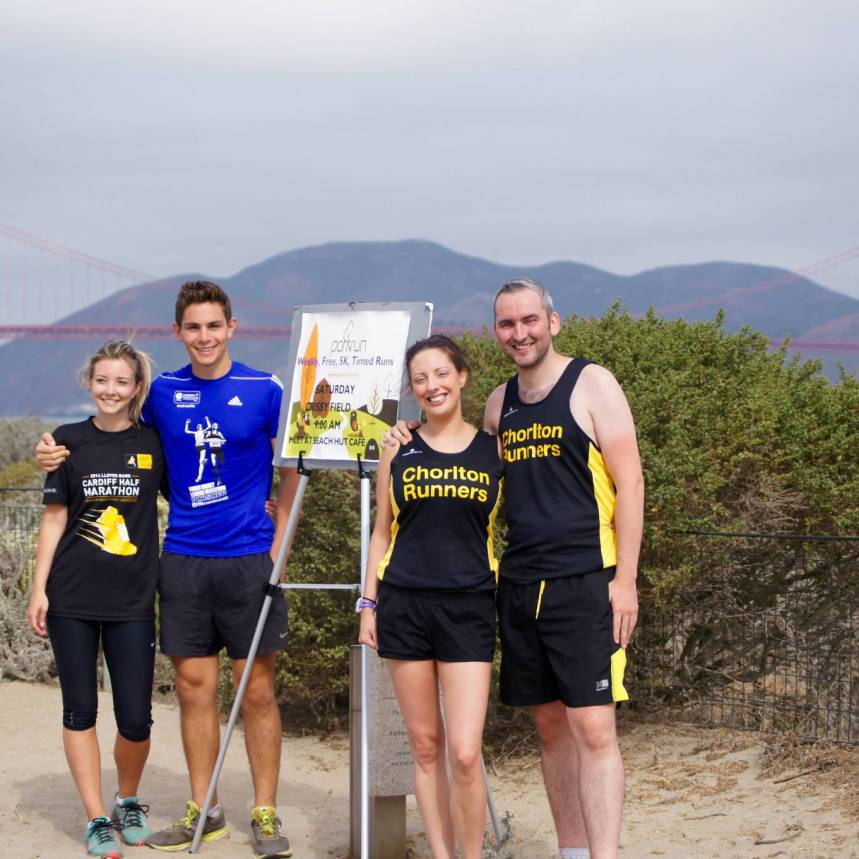 As you can imagine, I am now living with the most excitable person on the planet which is absolutely hilarious. Kid at Christmas x 100.

And that’s a wrap. I’m off to buy a hoola skirt and coconut bikini for my all expenses paid* trip to Kona.

*Yes Joe, you did say that multiple times on Sunday evening.

6 thoughts on “Ironman UK; the improved version. A view from the inside, by Katie Lysons”

Struggling through the fog at the moment. Life is full of hills - my mind just seems intent on making mine bigger than they need to be sometimes.
It’s the moment you’ve all been waiting for. Ironman Estonia race report - links on my bio.
Happy birthday to the other two members of my little family. Don’t know what I’d do without ya ❤️
This is James. Before Sunday’s Big Half we didn’t know each other. By the end we were swapping war stories like we’d been friends for years.
Who gives a stuff about Ironman - this was the real race.
An absolutely epic day yesterday at Ironman Estonia.