I know people are eagerly awaiting the juicy details from Katie’s run around the streets of Chicago. You’ll just have to be patient for a little while longer; it’s coming.

The day after the marathon was basically a travel day. We got up early (in Katie’s case 2am – I found her sitting in the bathroom browsing the internet) and I went for a little jog along the shores of Lake Michigan, inspired by the events of the previous day.

After hobbling down to breakfast and getting a few more tokeny tourist photos with the giant bean, we made tracks to the airport with Kona, Hawaii the final destination. The first flight to LA flew by, and after a short 30 minute connection, we settled in for the longer hop across the Pacific. Did you know, you could fit every single continent into the space of the Pacific Ocean and still have room left over? It’s massive.

The last stretch dragged slightly, but finally after hours of sea, we could see the lights of an island below. Kona airport isn’t exactly London Heathrow; it’s a really cool, little open-air airport, with no walls and the baggage carousel being covered by a straw roof. Love it. After picking up the hire-car, we made it back to the apartment we’re staying in (which is AWESOME), drank a quick beer (YOLO), and then crashed into bed, absolutely exhausted.

I woke up around 6 (result – what jet lag?), feeling like a 5 year-old child on Christmas morning. I’m in Kona! Too many things to do and not enough time to do it. For once, even breakfast was forgotten (which for those who know me well, will come as a complete shock), as we headed straight to the pier for a morning swim in the sea. 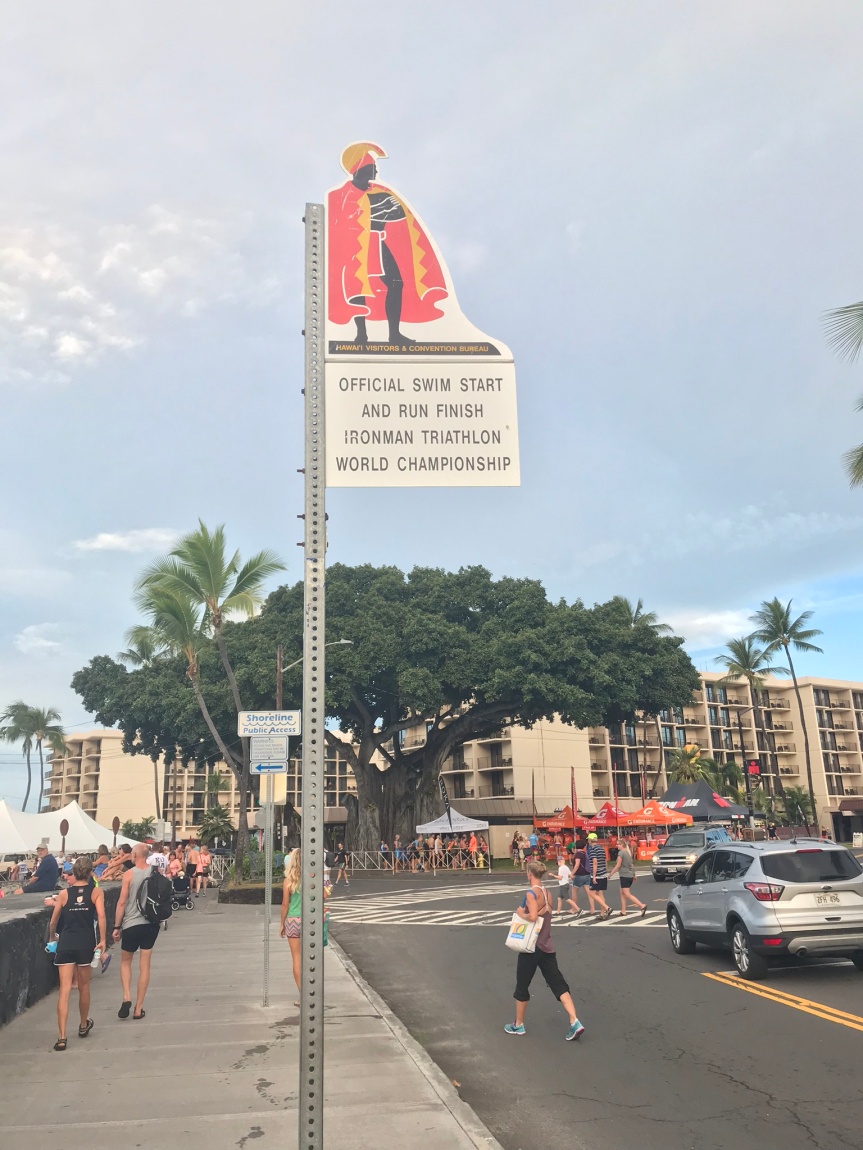 Normally, I’m reluctant to swim, but I had no trouble pulling my trunks on this morning! I headed out from ‘Dig-me’ beach for 15 minutes or so before turning around and heading back. The water was lovely and warm, and there were loads of cool fish swimming underneath me – sorry Tooting Lido, but Kona wins. Katie was rocking her brand new holiday bikini and was more excited about the swimming dog than the exotic fish. 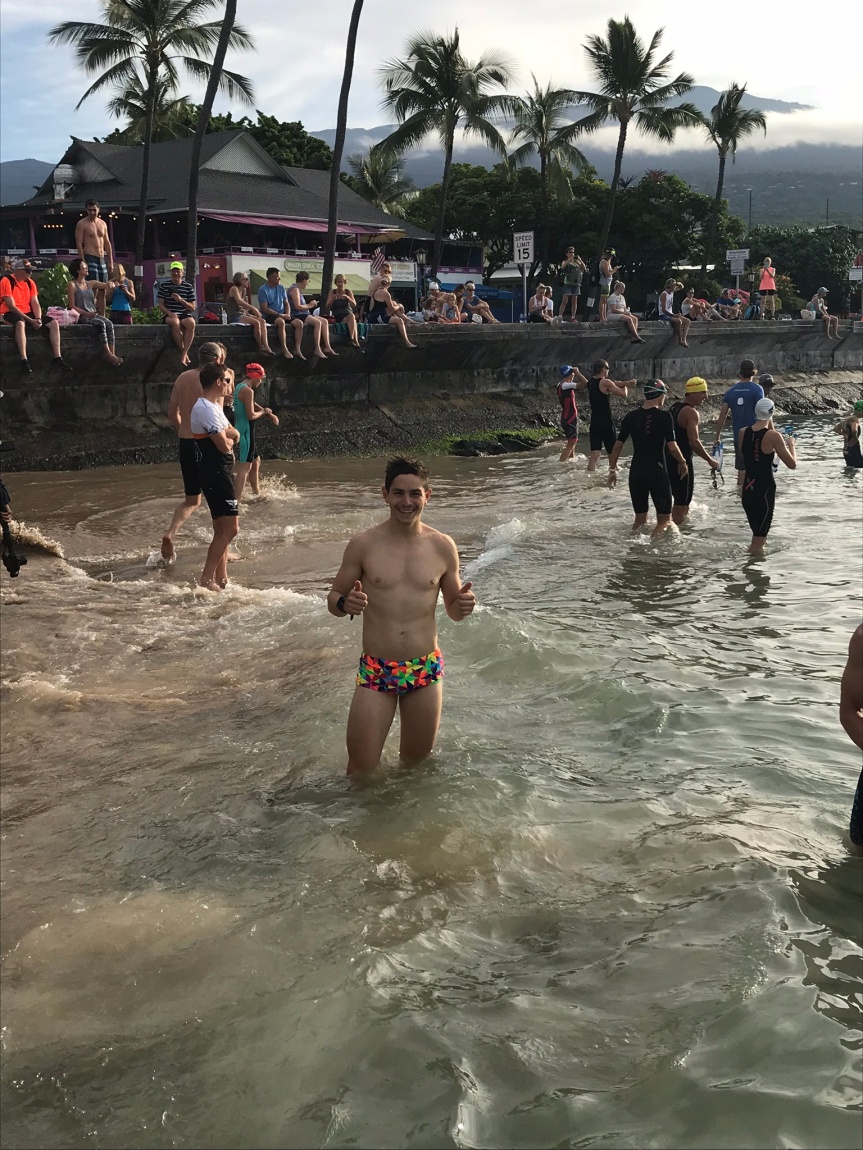 As I was getting out, I had my first ‘pro-spot’, with Will Clarke just about to have a quick dip. Will’s a professional triathlete (and a good one at that), and I couldn’t resist shaking his hand and wishing him luck for Saturday – legend.

We then head to Huggo’s, where Breakfast with Bob is filmed. Every morning Bob Babbitt interviews various professional triathletes in the lead up to the race. We had a cracking breakfast and saw Patrick Lange, Jan Frodeno and Michelle Vesterby among others. It was super low key, and they were happy to stop and chat, with Spraggins playing the role of chief fan boy.

After taking my bike out of the box and putting it back together (I was actually pretty impressed with my skills here – just waiting for the bike to fall apart mid-ride now), I wanted to get out and ride some of the bike course, as instructed by Sporting Director and Kona legend Paul Burton (they’ve got his picture up on a load of banners all the way down Ali’i Drive). 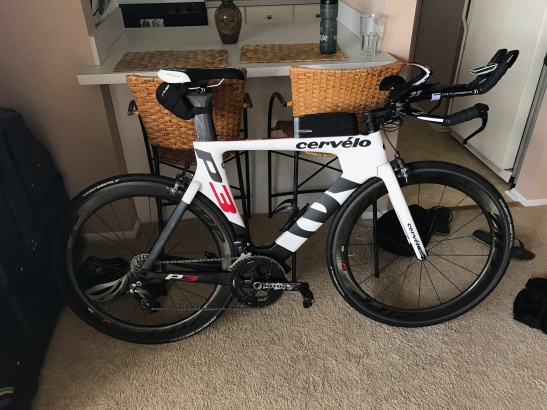 Katie and I hit the road and I jumped out to ride the climb to Hawi right at the end of the bike course. I was only riding down a hot, bumpy straight bit of tarmac, but I might as well have been kicking a ball around Wembley stadium. I was riding on the Ironman bike course! This is amazing!

I was also sweating more than I ever have done in my life, and it felt like I was having a hair dryer blown directly into my face; but that’s all part of the fun right? After enjoying a refreshing cold-drink in Hawi, I turned around and enjoyed flying down the descent, covering 6 miles in about 11 minutes – it was pretty gnarly.

I met Katie back in Kawaihae and we headed back to Kona via the giant supermarket, spending an extortionate amount of money on groceries (trying to keep it American). I had about 3 minutes to inhale lunch before it was time for the next commitment; the parade of nations. Think like the opening ceremony of the Olympics, but a Tesco Value version.

After being given some rather swish GB t-shirts (thanks to Huub!), we ambled through Kona behind the British flag, larking around and chatting triathlon. In true British fashion, we’d brought the rain with us and it was absolutely chucking it down.

I got the chance to meet loads of other guys from home, and it was really cool to hang out as a group and get to know everyone a bit better. The parade ended up in the expo, and after a bit of a nosy around, we headed back to the apartment for some food and a chill. 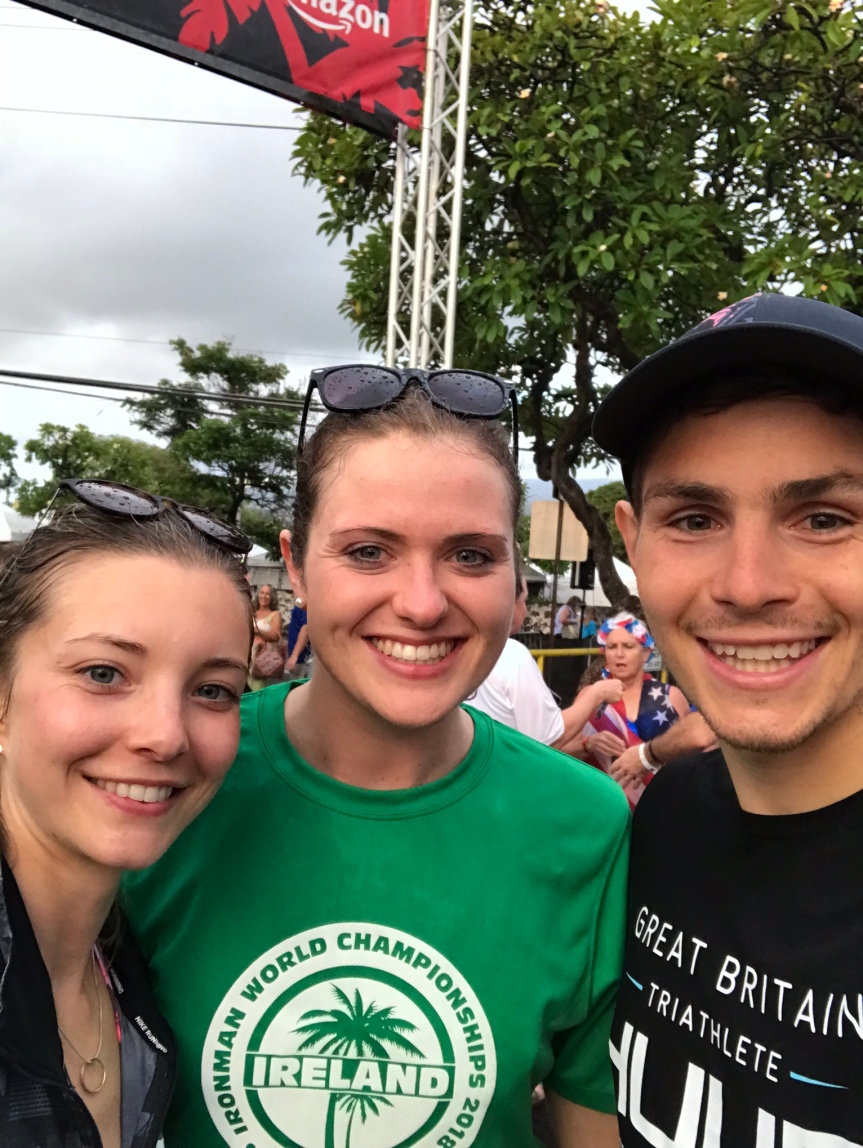 I have to keep pinching myself to remind me that I’m actually here. It’s only been 24 hours and I’m already having the time of my life. I keep having to tell myself I’ve got a race to do on Saturday; don’t get too excited just yet!

Mixed weekend.
Ironman and triathlon have been a huge part of my life in the last 7 years. I’ve made so many memories and friends through a shared love for the sport.
That feeling of knowing that everyone has your back, but no one can save you from what’s happening, no matter how much they want to 👎🏻
6 months today.
There’s life in the old dog yet. Broke the hospital VO2 max record - the cardiac specialist was absolutely buzzing. There was me thinking my record breaking days were over.
Training for a Spring marathon? Know someone who is? Want a free hug from race director Flat Cap Spraggz as you cross the finish line? Then come join the fun.