T-minus 2 days to go. It seems as if someone is pressing fast forward on a remote control of my life. I’m excited to race, but at the same time, I’m having such a good time, I just want to savour every moment we’ve got here.

This morning was the real A-race of the week, and something I’d been looking forward to ever since qualifying; the Kona Underpants run.

Every year everyone whacks off (most of) their clothes for charity and goes parading down Ali’i drive, taking loads of photos and generally just messing around. Those who know me, will know I’m quite the introvert, so it took a great deal of persuading to get me involved. Eventually I caved, still shivering at the thought of running around in speedos in public.

Paul had given me lots of coaching specifically for this event. Don’t go out too hard, concentrate on the end result and most importantly, keep it in your pants. He wanted a sneak preview of my kit to see what it’d look like, but I thought that was all a bit weird.

A friend from back in London, Helena, who raced with me and qualified at Ironman Wales last year, parked up at our apartment and we wandered into town together.

The plan was to go for a little swim beforehand, so I got in a quick half hour. I’m apprehensive for my swim come race day, as I appear to be the slowest swimmer in the whole of Hawaii, but I’m feeling better as each day swimming in the ocean passes by. I know I’ll get through it, I just hope I can give a good account of myself.

After a quick change into the race gear, we met Katie and another Brit, Chris (who also qualified in Wales, thrashing me in the process) and began limbering up with the start moments away. 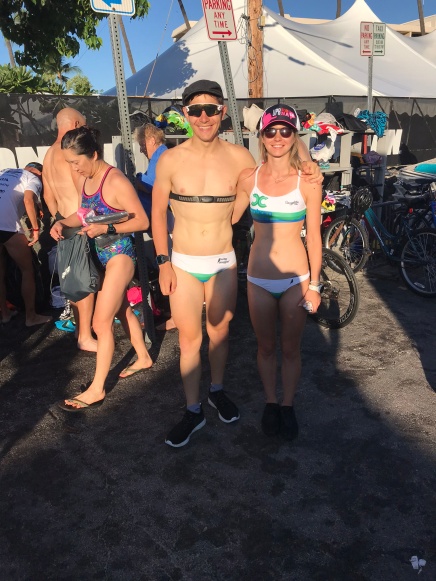 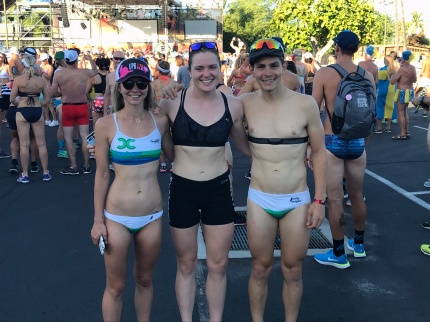 Cue one of the most bizarre 25 minutes of my life, in which hundreds of people of all shapes and sizes trotted around taking pictures and generally just having a great time. Katie and I were proudly repping out matching Clapham Chaser budgie smugglers. 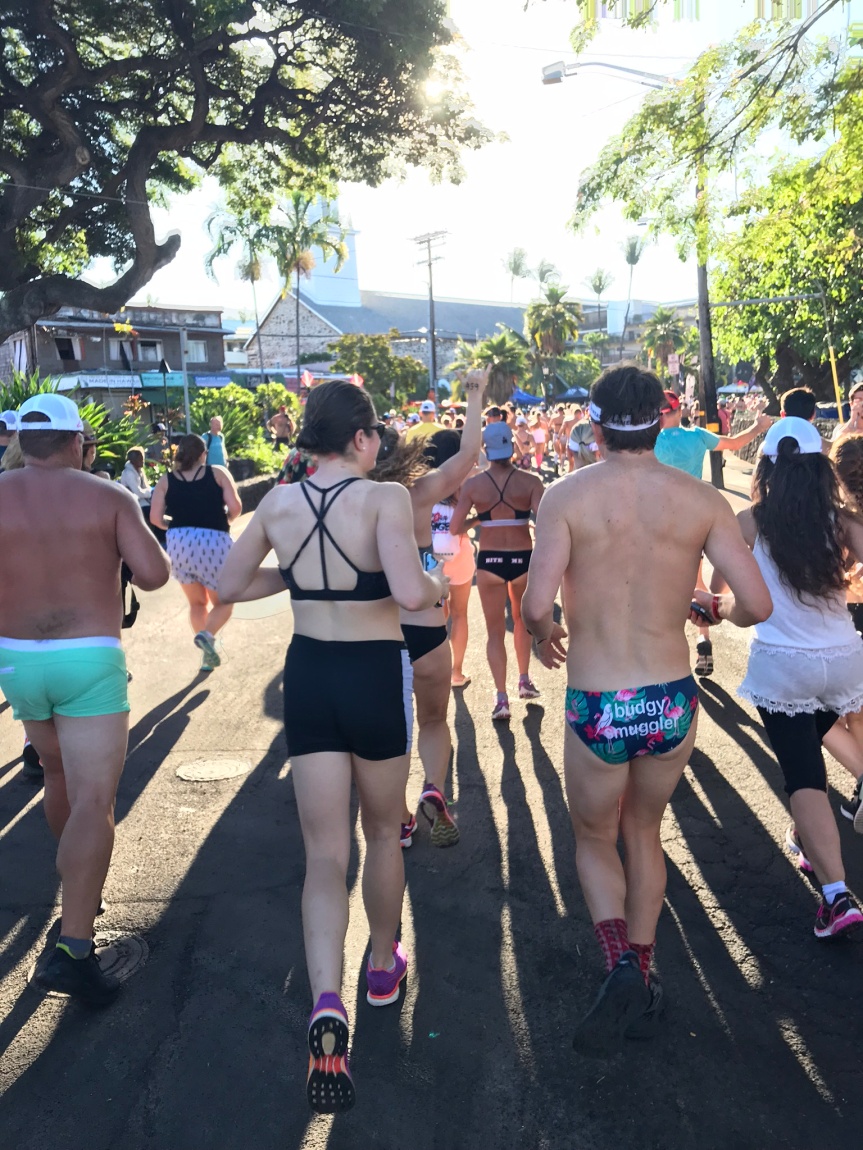 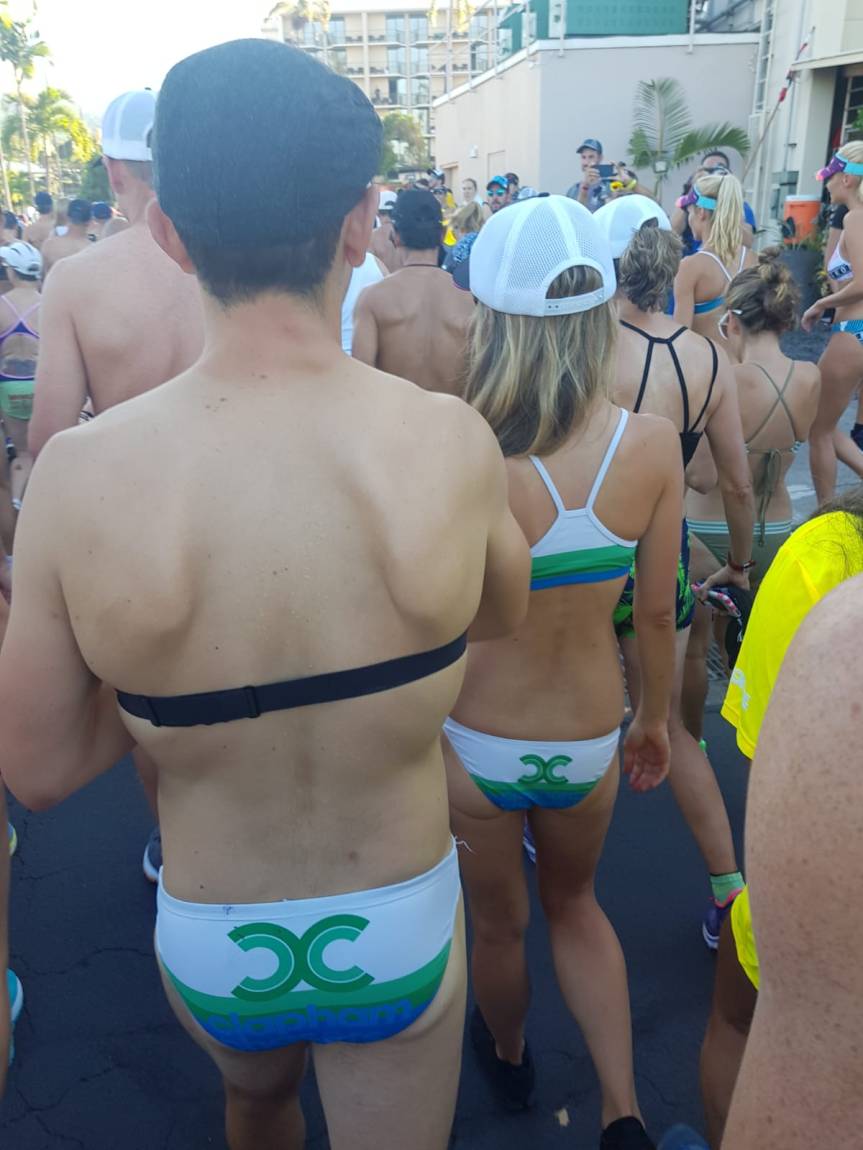 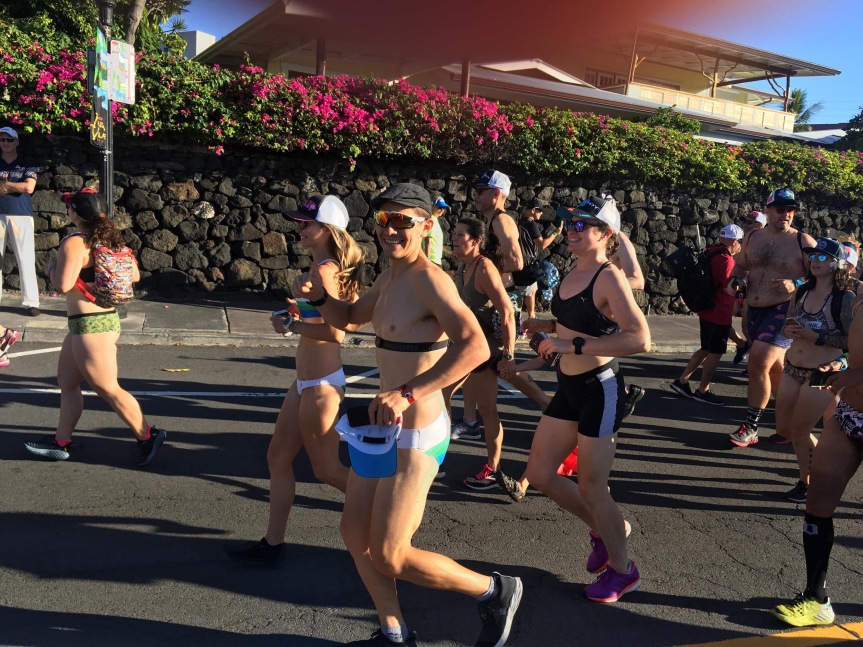 Afterwards we bumped into yet more Brit’s and got the compulsory photos whilst laughing at the fact that none of us were wearing any clothes. We also managed to get a picture with pro-triathlete Jesse Thomas, who is an absolute legend. 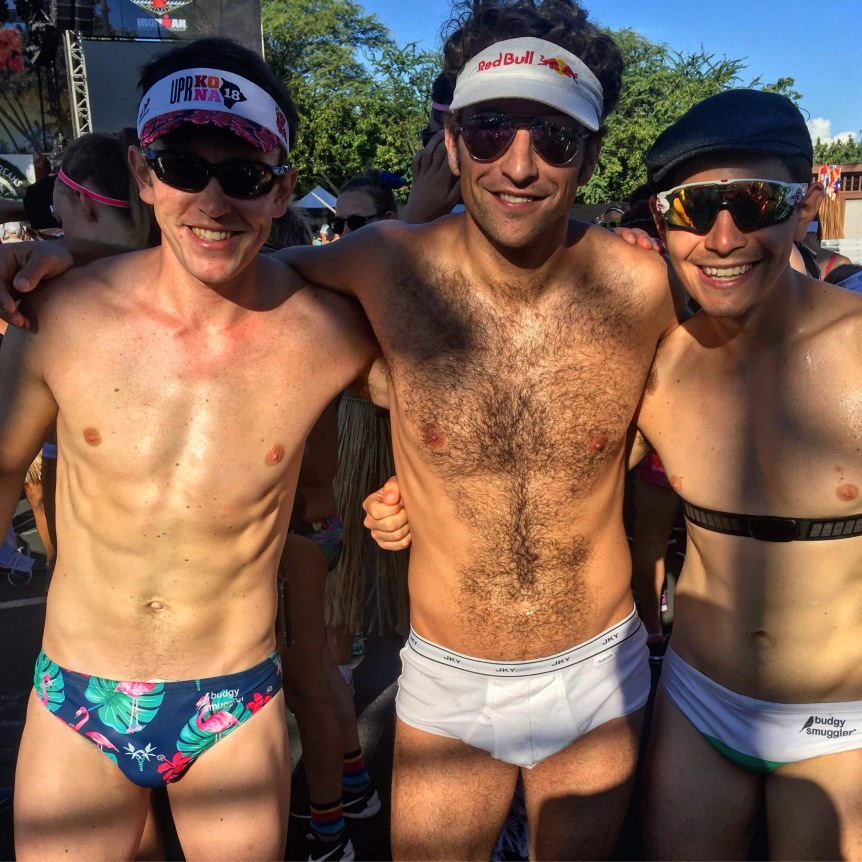 We headed back to Huggo’s to watch a few more interviews on ‘Breakfast with Bob’, and Dave Scott (6 time world champion and possibly the best Ironman athlete of all time) corned me and asked if he could have a picture. Well, if you insist Dave. 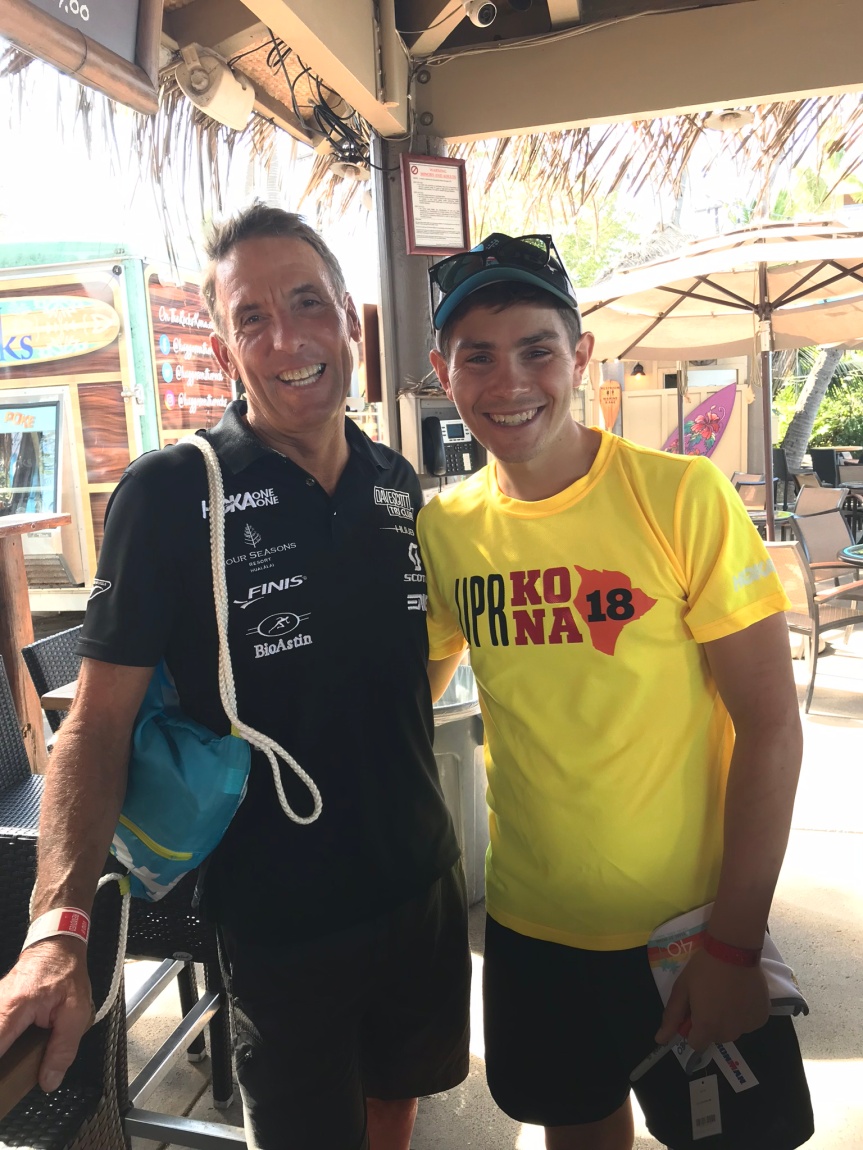 Nick Rose was also there, and it was lovely to meet his family who are doing the Disneyland double (triathlon Disneyland here and then the real one in LA). He’s also writing a blog whilst here if anyone wants to give it a read.

I hadn’t had any bike issues yet, but wanted to get them out of the way before the race. So, during my hours ride along the Queen K, my chain got jammed between the rear cassette and my wheel. The chain bent and this trashed my rear cassette at the same time. Brilliant.

I sent an SOS to Katie and slowly cooked to death on the side of the road waiting for her to come and rescue me. By the time she arrived I’d created my own swimming pool of sweat and my mouth was drier than Gandhi’s flip-flops. I dropped off the bike with Cervelo, hoping for a quick fix.

Whilst waiting for this to be done, we stumbled upon the team Canada gathering in one of the local bars. Various free food and merchandise was being handing out, and being known to love a bargain or two, Katie and I decided we could easily pass as Canadians for an hour or so. What both of us failed to realise, was that I was wearing my team GB stash, which says Great Britain in massive letters on the front. Fail.

I popped back for my bike a couple of hours later, and they’d already fitted a brand new chain (for free) and given it a full service. Absolute legends. Hopefully that’s all the bike issues done for the week. I think I’m due a bit of good luck.

We took a trip to the natural energy lab; sounds like a Bond villain lair, but really it’s just a nice stretch of road down by the ocean, which we have to run up and down on Saturday. I say nice, it’s nice if you want to go and paddle and relax in the shade drinking a cocktail. Not so nice if you have to run along the scorching tarmac with the temperature at over 30 degrees. Now where did I put my Mojito? 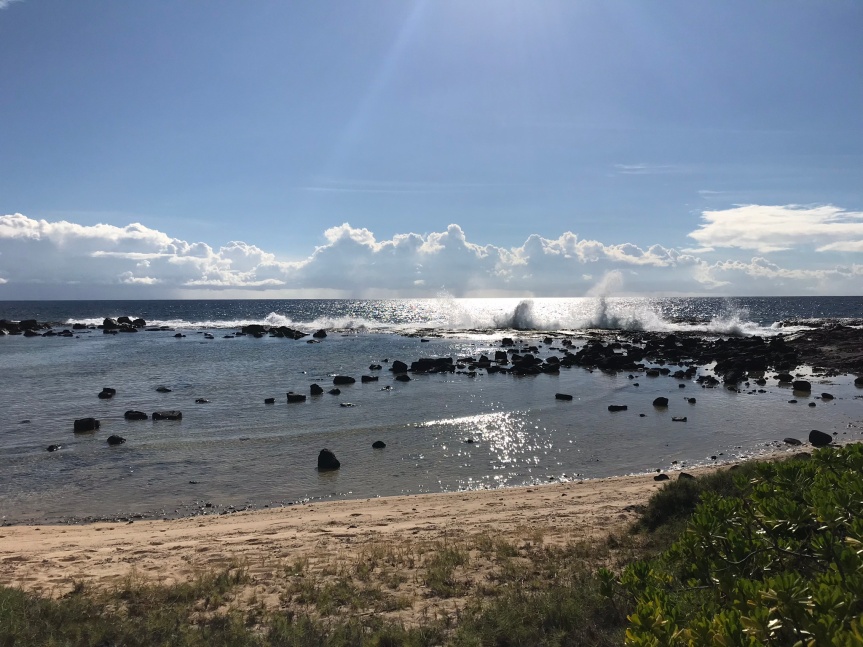 The welcome banquet was taking place in the evening; a chance to scrum down with the masses and pile your plate as high as possible with some free food. I sat with some of the British guys as various speeches and performances took place. All very nice, but with my bedtime (8pm) rapidly approaching, I took my leave and sauntered back to the apartment. Another day in paradise ticked off.

Mixed weekend.
Ironman and triathlon have been a huge part of my life in the last 7 years. I’ve made so many memories and friends through a shared love for the sport.
That feeling of knowing that everyone has your back, but no one can save you from what’s happening, no matter how much they want to 👎🏻
6 months today.
There’s life in the old dog yet. Broke the hospital VO2 max record - the cardiac specialist was absolutely buzzing. There was me thinking my record breaking days were over.
Training for a Spring marathon? Know someone who is? Want a free hug from race director Flat Cap Spraggz as you cross the finish line? Then come join the fun.