What do you mean this isn’t the race report? Surely you can stop having fun on your holidays and get writing?!

I want to make sure I let the dust settle and give a full account of what was a truly unbelievable day, so I’ll be writing it over the next few days. I can guarantee you it’ll be an absolute epic. All I will say is the number of messages and support I got both before and after the race was absolutely overwhelming, and they meant so much to me.

I slept fairly well the night after the race, but was still up pretty early, my brain whirring with the memories of the previous 24 hours. I decided to do something productive, so packed my bike up back into it’s little box; I’ll actually be quite happy not to see it for the next couple of weeks or so..

We headed into downtown Kona for some breakfast at Splashers. I demolished a stack of pancakes and finished off Katie’s French toast as well. I also took this opportunity to check out the additional ‘finishers’ gear that had popped up overnight in the merchandise tent. I couldn’t resist an official finishers jacket – after all, it’s cold in the UK right now, so I’ll need it?

Not really feeling like being on my feet for any significant period of time, we hopped into the car and drove up to the summit of Mauna Kea, one of the dormant volcanos on the island. The views back down to the sea once you started to climb were pretty stunning. Back at the apartment,  we had a couple of beers and a snooze before the official awards banquet in the evening.

Katie had surprised me after the race, buying us these super snazzy matching Hawaiian outfits, after I’d been banging on for ages about getting them. Clearly there was no other option re; attire for the evenings festivities, so we wandered down Ali’i drive drawing more than a few smirks from passers by. Let them laugh; they have no idea what fashion is. Calvin Klein here grew up on the catwalk.

The banquet was good fun, as we got to to catch up with some of the other Brits we’d met whilst over here. Helena Hayes, Chris Wallace and Simon Lovelock all had superb debuts in Kona, and it was brilliant to be able to share the whole experience with them. Continuing with the theme of the week, there was plenty of queueing, but the food was surprisingly good and we certainly made the most of the free beer on offer. It was also awesome to watch Ruth Purbrook head up on stage and collect her award after becoming AGE GROUP WORLD CHAMPION! Absolutely incredible stuff.

The afterparty took place at Huggo’s, so we headed there and proceeded to have more than a few drinks. It was awesome, as even though loads of the pros were also there, it was super relaxed and everyone was just having a great time. Daniela Ryf politely asked me to move when she found us in her path (only after asking where we got our super cool outfits from), whilst I’ve never seen someone so starstruck as Katie was when Lucy Charles walked in. 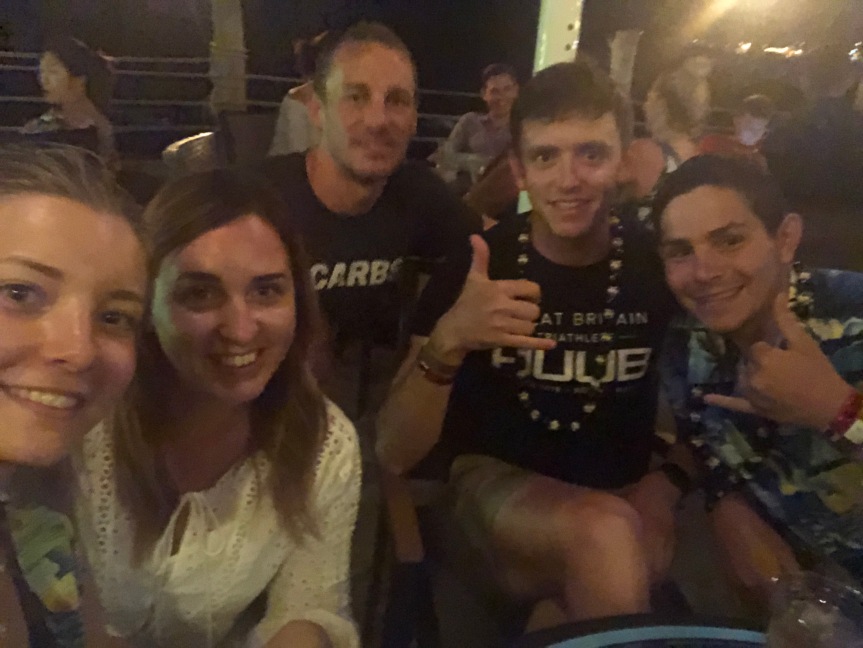 I woke up severely dehydrated for the second morning in a row, this time for a completely different reason. Packing up all our stuff, including the 37 free hats we’d managed to hoover up this week, wasn’t the most appealing of prospects, but it was time to get on the road to our next location.

We drove South from Kona, stopping off to do a little hike to Green Sands beach and back. I’ll leave you to guess how it got it’s name. Usually, going for a nice walk in the fresh air helps when you’re feeling a little worse for wear after a few drinks. Not so much when it’s 30 degrees, the sun is beating down and you’ve left your water in the car. 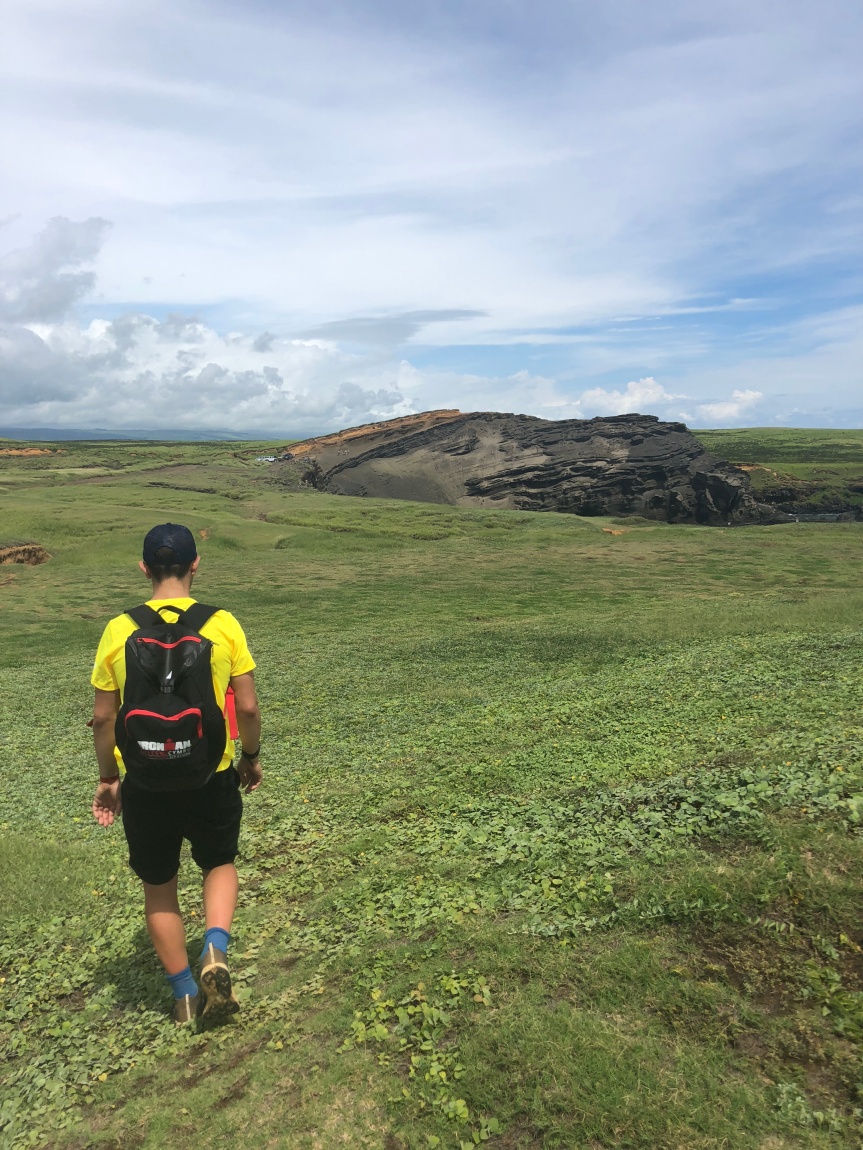 However, it was more than worth it, as the beach was absolutely stunning and the sea glorious. The way the bay was shaped led to the waves being fairly spicy, and I nearly lost my Ray Bans to the depths of the Pacific, just about holding on to them as a giant wave crashed on top of us. 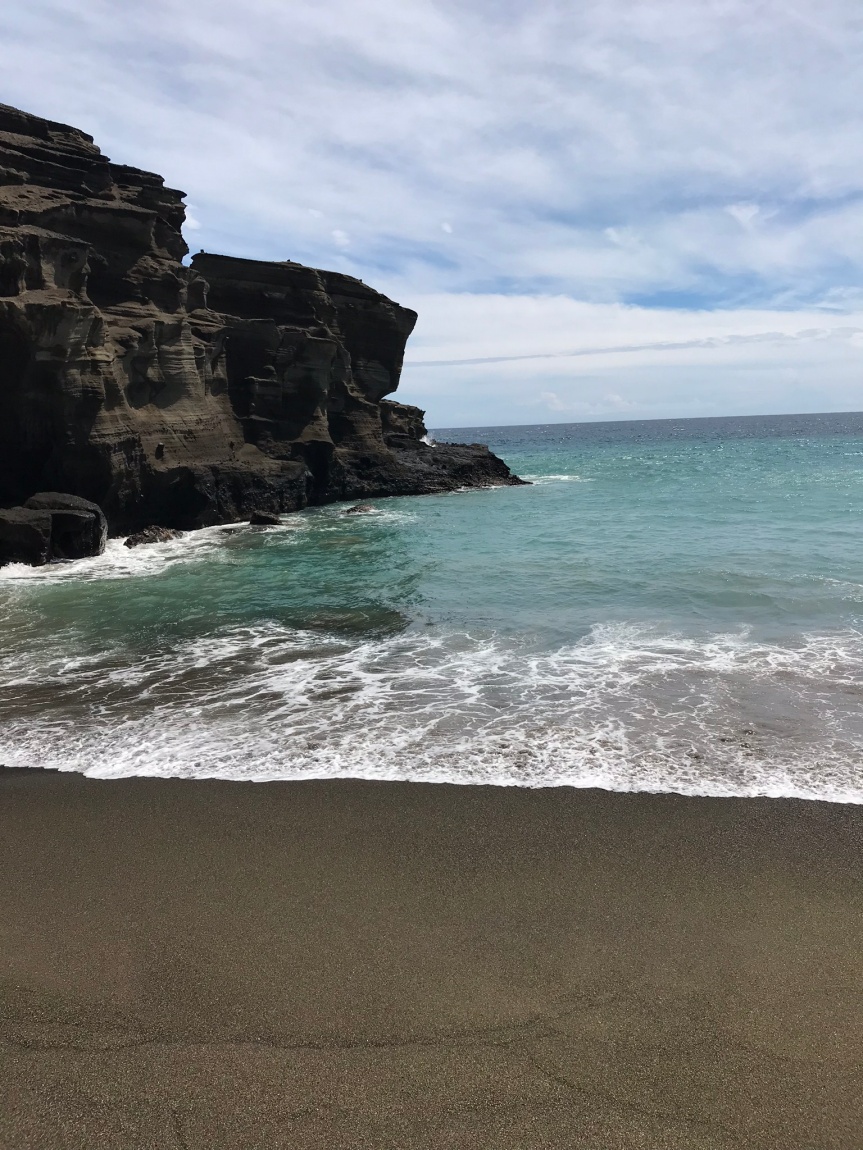 Continuing along the coastal road, we stopped at the famous Panaluu bakery to enjoy some vanilla filled donuts topped with chocolate. Don’t mind if I do. There’s a pastrami sandwich going? I’ll have one of those too. We then stopped at the Black Sand Beach (they like the imaginative names over here), another beautiful spot that had these sea turtles just resting on the rocks. I had no idea how big they were – we just sat watching them relax and swim around; it was amazing.

We checked into our new place, which was a massive house near Volcano village surrounded by rainforest on all 4 sides. It’s probably the most peaceful, tranquil place I’ve ever stayed, which is perfect after the madness that was Kona. We’re just a mile from Volcano national park, which contains 2 active volcanos. Normally I’d back myself to run away if things start kicking off, but with the legs in their current state, I think I might be in trouble. 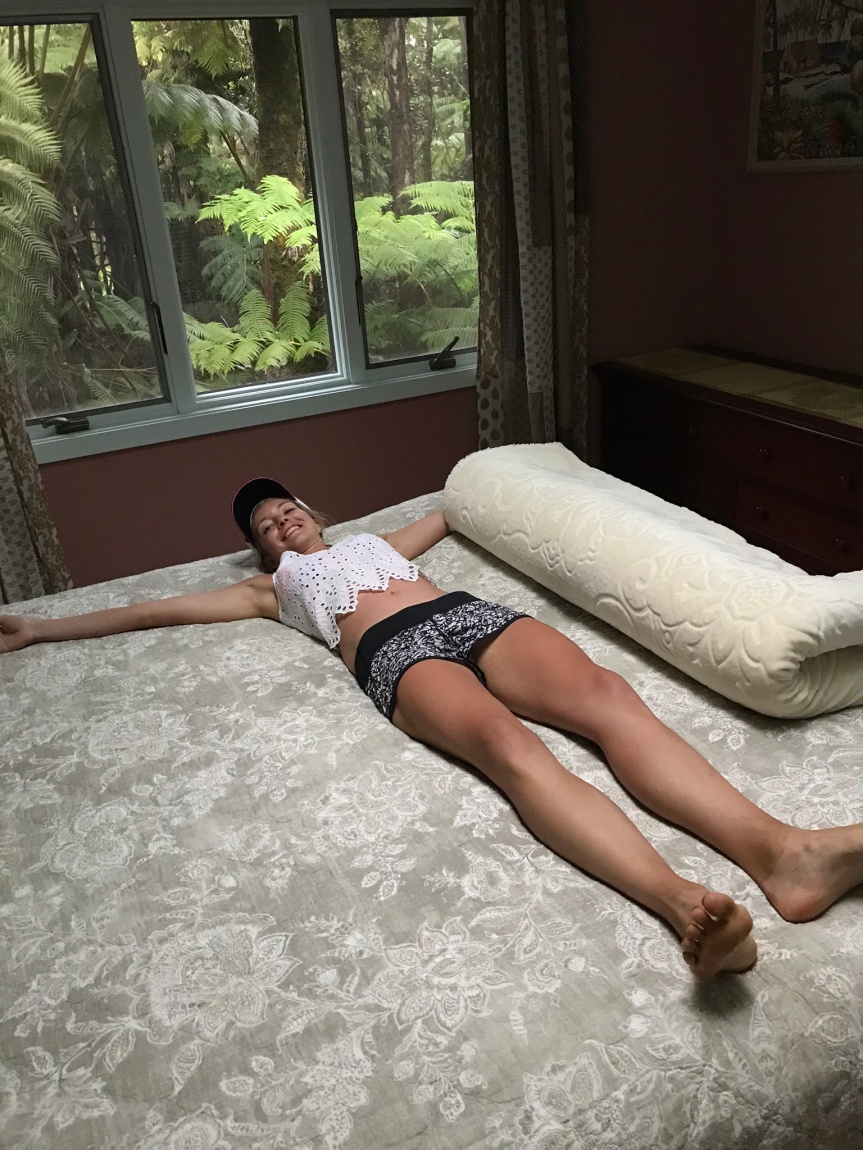 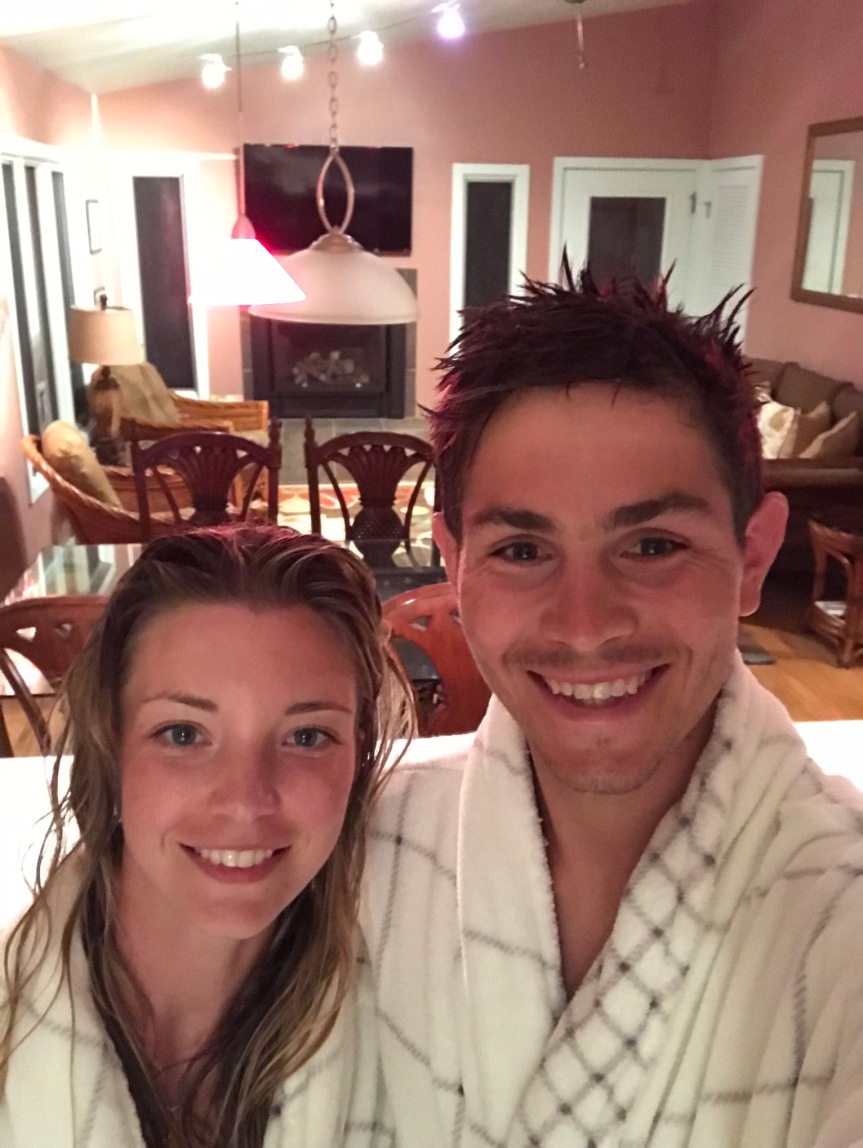 We spent the following day exploring the park, doing various hikes and checking out the lava. The landscape was pretty surreal, and at various points it felt like you were walking on the moon (experienced astronaut over here clearly). Large parts of the park are still closed as one of the volcanoes was erupting very recently and it’s done a large amount of damage to the roads and trails. 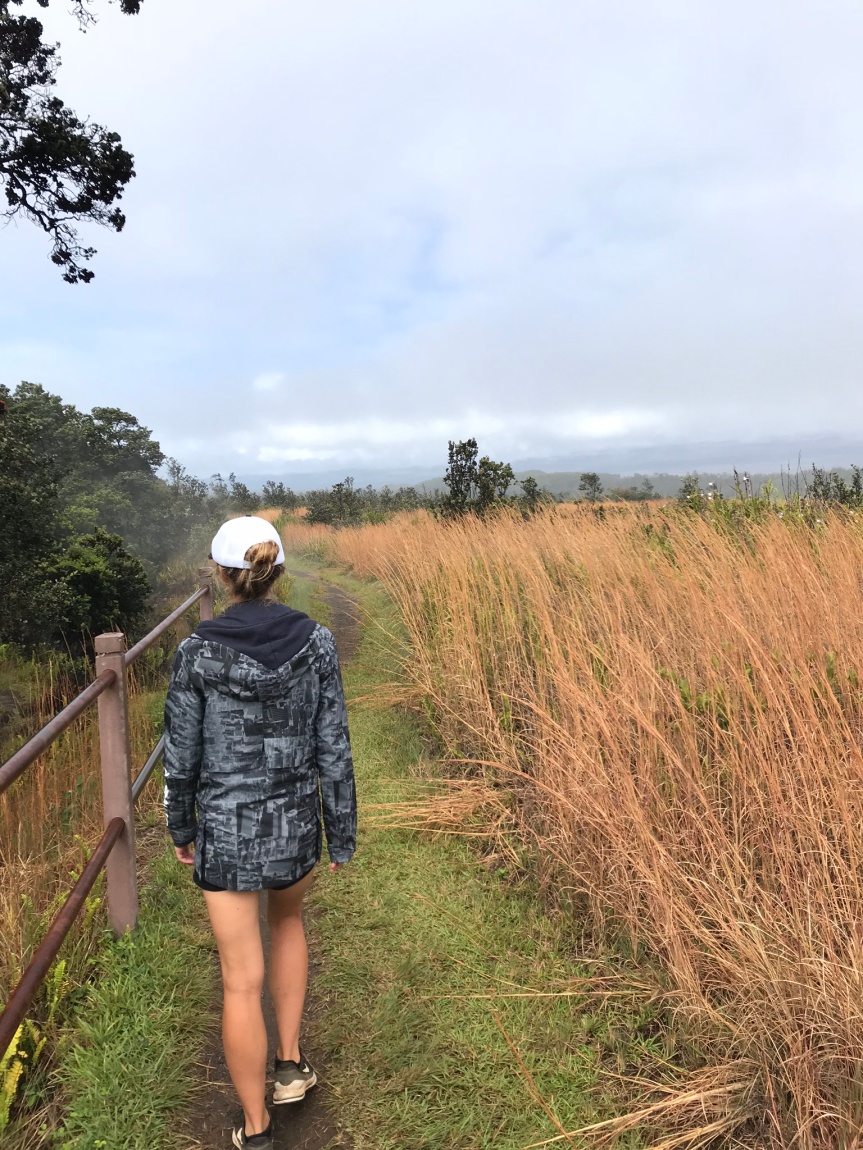 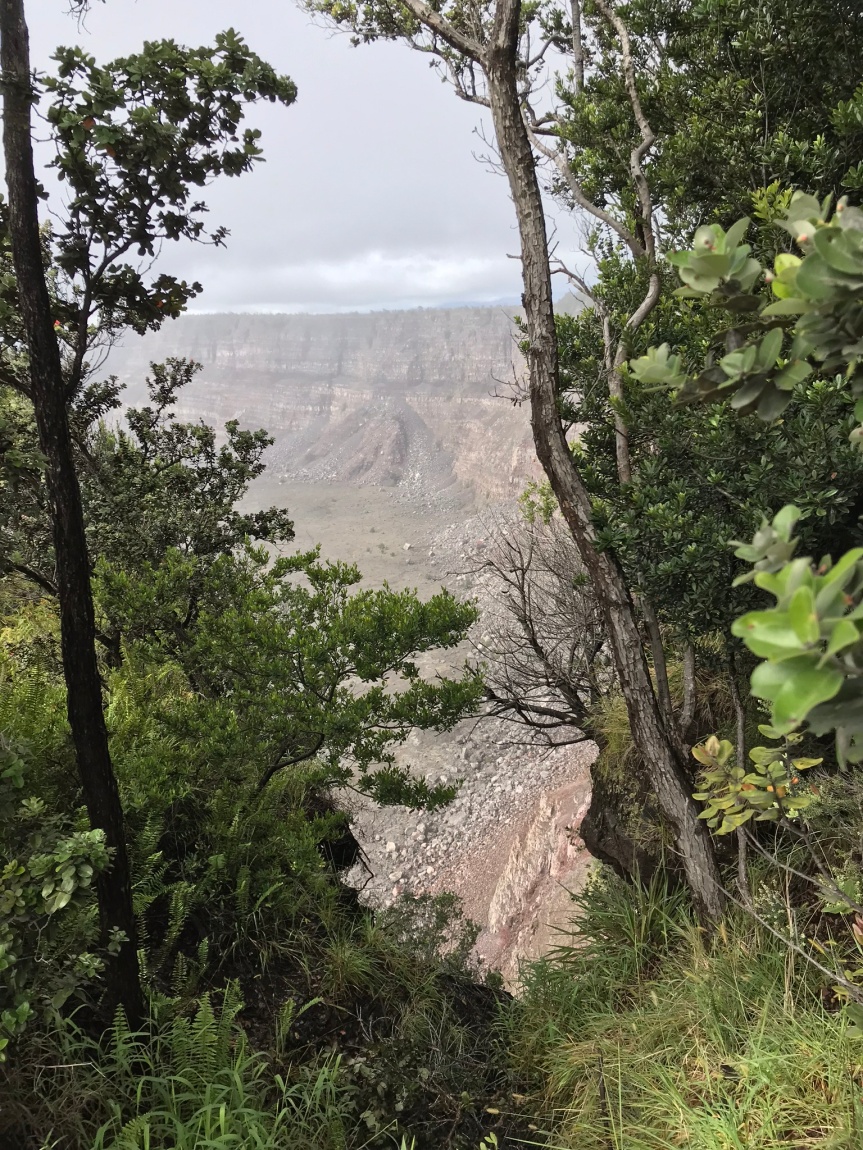 Later that afternoon we drove down into Hilo, checking out the Rainbow Falls and had a little explore. Apparently Hilo is one of the wettest cities in the world and has the most rainfall of any in the entire United States. Guess what the weather was like when we wandered around? We ended the day with another one of our favourite activities, a trip to the giant supermarket. I’d already made my way through a giant box of cookies in the last 24 hours so we needed to re-stock on snacks.

Getting itchy feet, we decided we needed a bit of activity back in our lives. So Wednesday began bright and early, with a hike up the active volcano, Mauna Loa, on the cards. Unfortunately, the trek all the way to the top was too far (I was trying to convince Katie that we could just about knock off 45 miles in a day, but common sense prevailed and it’s just as well that it did), so we were going up to Red Hill cabin, at just above 10,000ft.

The way up was incredible; the landscape was constantly changing with different types of lava rock making up the trail. I mean I didn’t have a clue what the difference was between the rocks, but it looked bloody cool. It was 7.5 miles/just under 3 hours to the cabin, which seemed to fly by, and we stopped there for a spot of lunch.

As usual, we’d been super prepared and just worn shorts and t-shirts as well as chucking an extra hoody into the bag. Just as we were setting off back down, a storm blew in and the rain very quickly became torrential. Luckily it wasn’t too cold, but we were soaked within 2 minutes and decided to get off the mountain as quickly as possible, so started running through the rocks.

This went surprisingly well for most of the journey back. I had a mini-tumble, fortunately falling on the softest part of the entire slopes, and not head-first into a pile of sharp lava rocks. With just 10 minutes to go until we were back at the car, Katie was less fortunate. She tripped on some loose rocks and hit her head on the ground, cutting her knee in the process. She also managed to cut her lip open which is going to turn into a rather fat one. Thankfully she was more shocked than hurt, and will most likely live to tell the tale.

I think a combination of the altitude and Katie’s serious injuries (definitely joking parents; she’s fine) took the wind out of our sails and we decided to spend the rest of the evening relaxing in our palace and finishing off the massive tub of ice cream we’d purchased alongside the cookies.

The following morning was our last on the big island; I was genuinely sad to be saying goodbye. Thankfully we were going to Maui, so put your violins away for now. We popped back to the black sand beach we’d visited on the way to Volcano, on the off-chance we might see some more marine life. With nothing happening above the water, I decided to pop my goggles on and see what lies beneath.

Within minutes I was wildly beckoning Katie to strip off and join me; I’ve never seen her move so fast – unfortunately it was for a turtle and not me. We spent the next 15-20 minutes swimming alongside a huge sea turtle (it’s shell was the size of a bodyboard). It was one of the most amazing experiences I’ve ever had – he was perfectly happy to swim with us and seemed completely indifferent to our presence. In the excitement, all the other hundreds of multi-coloured fish we were swimming with went unnoticed. 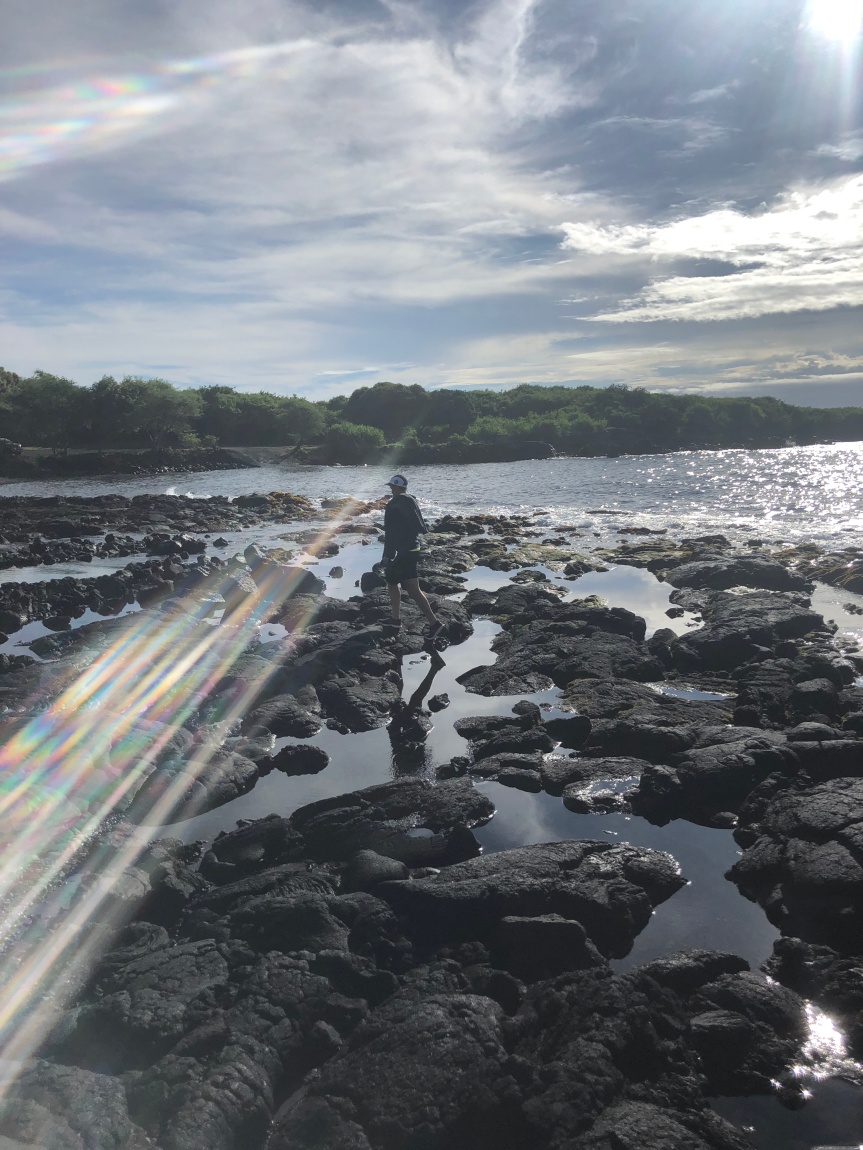 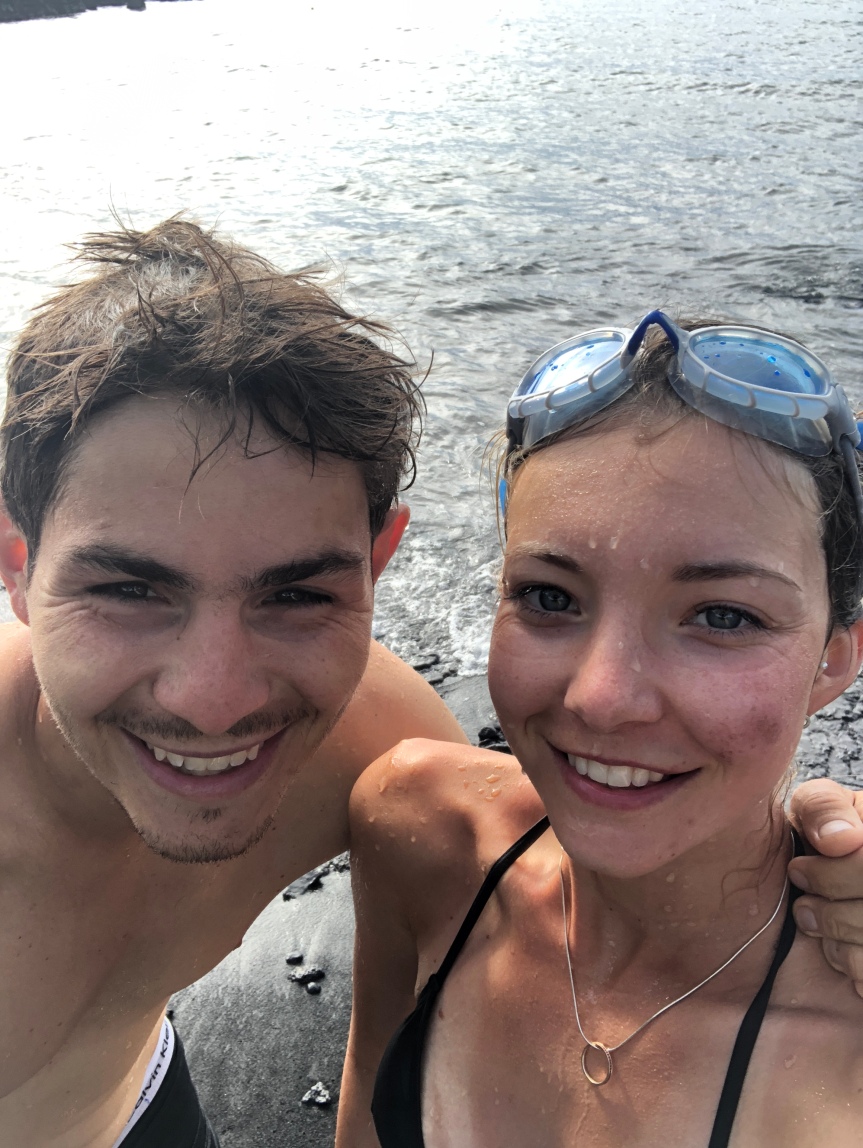 We tore ourselves away with a flight to catch. One last stop off back in Kona to Huggo’s for breakfast; it’d be rude not to. One giant stack of pancakes later and I was struggling to move – heavenly. We turned up at the airport to discover that our plane to Maui was big enough to seat 9 people. This day keeps getting better and better! 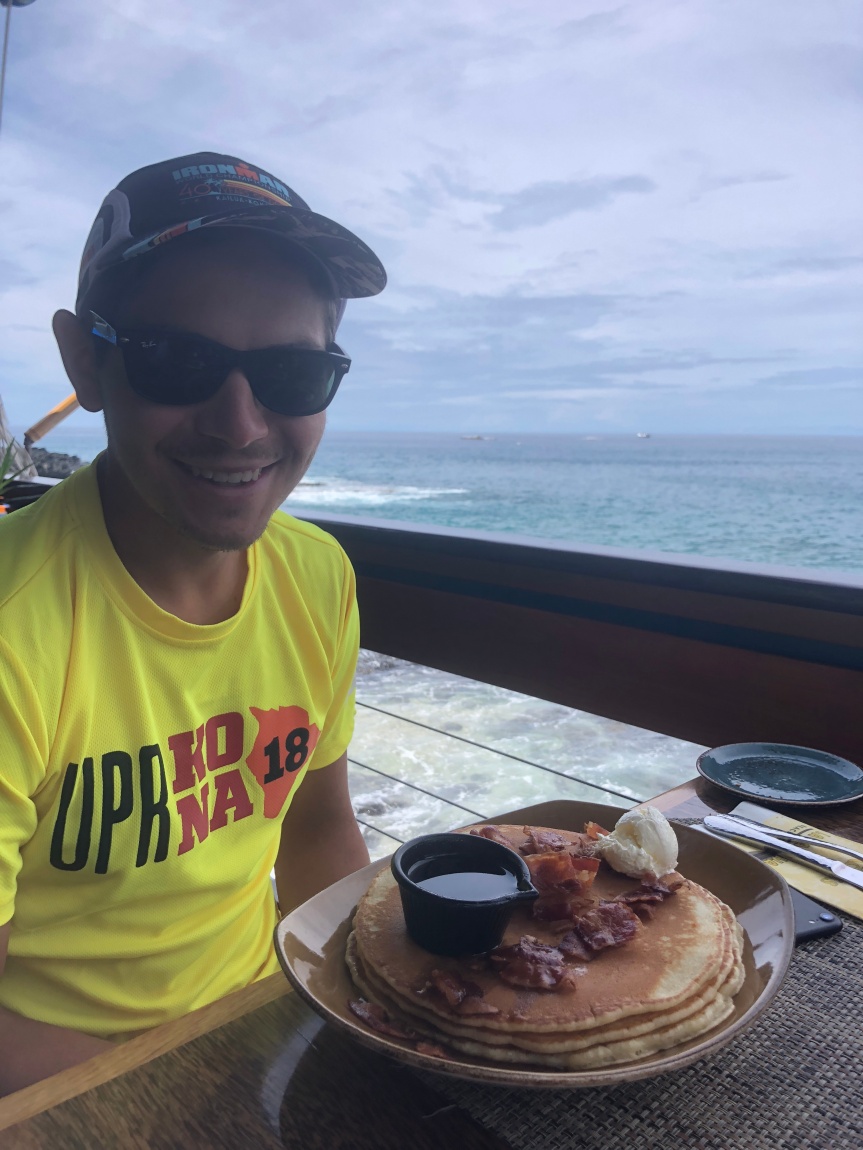 The departure ‘gate’ was just a picnic bench behind a metal gate, and ‘boarding’ consisted of the pilot taking a register of the 5 passengers that would be on our flight. It was the easiest and smoothest process I’m ever likely to have at an airport. The journey itself was incredible, with amazing views of the different Hawaiian islands as we flew low below the clouds. 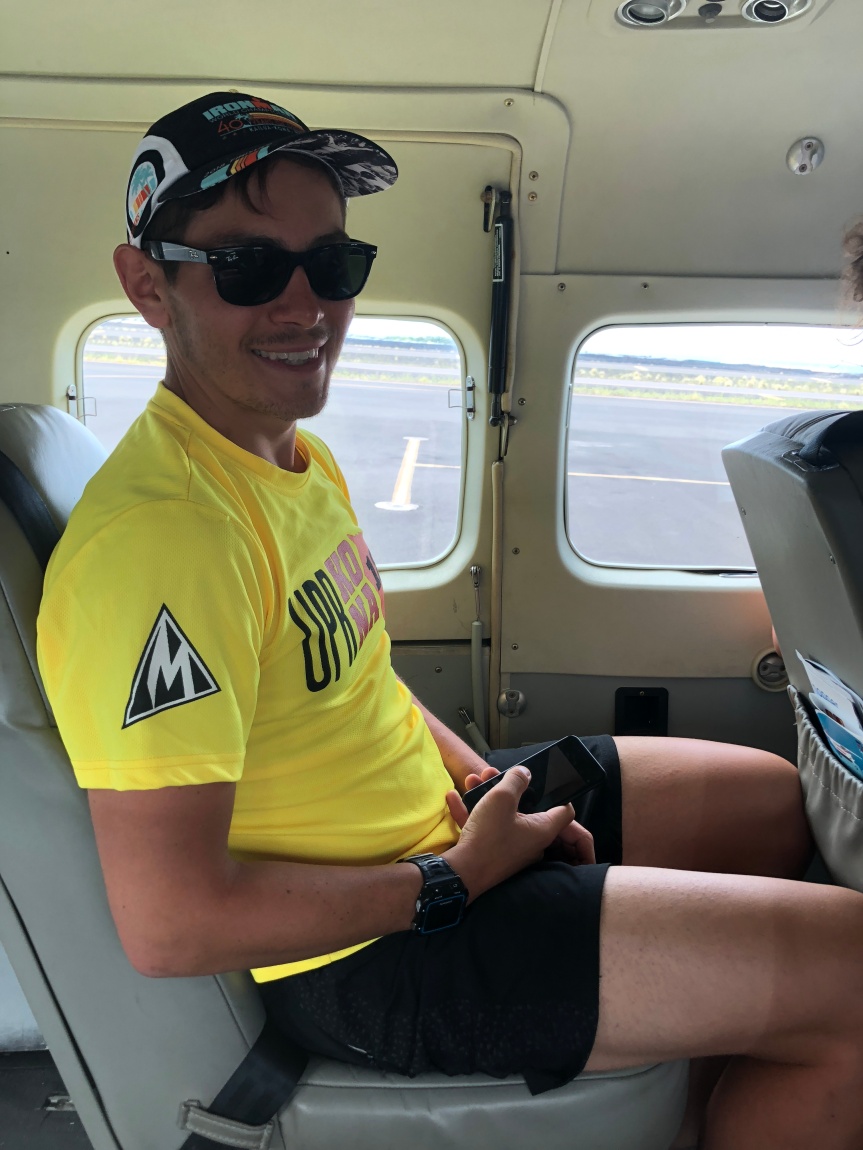 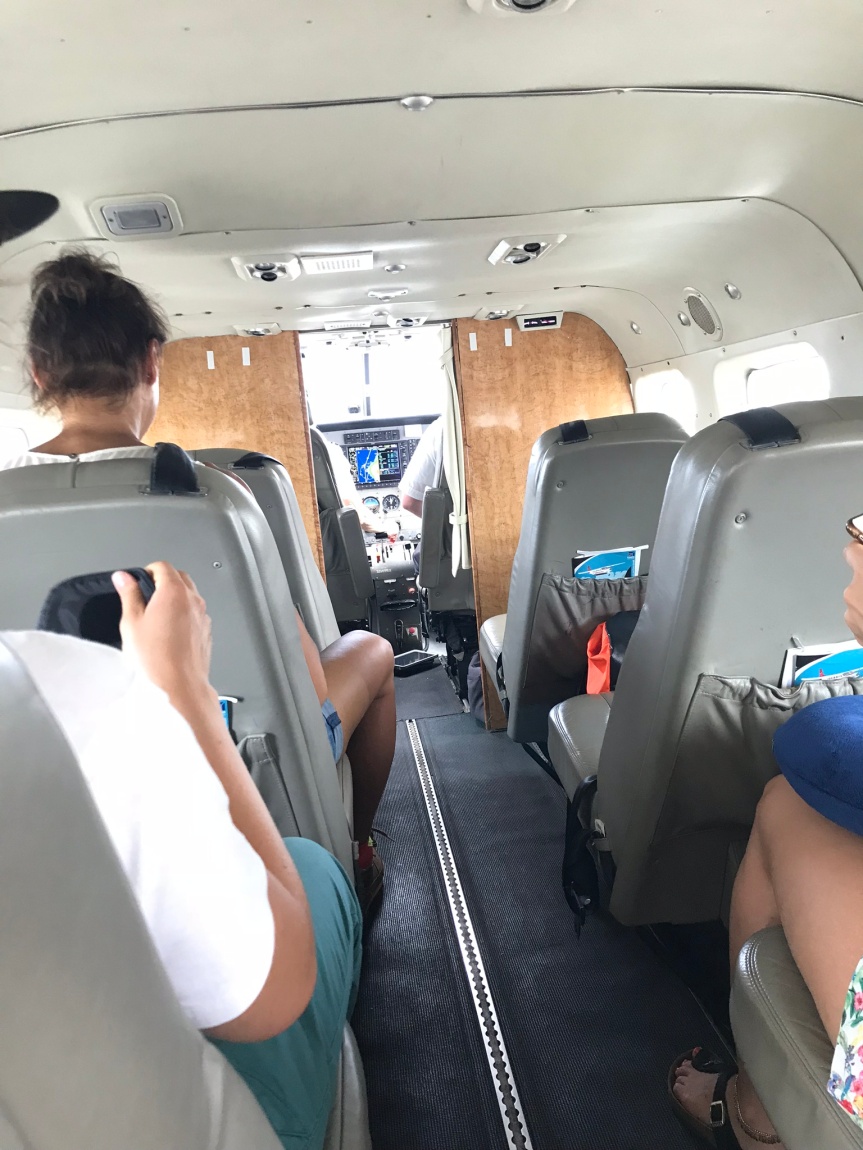 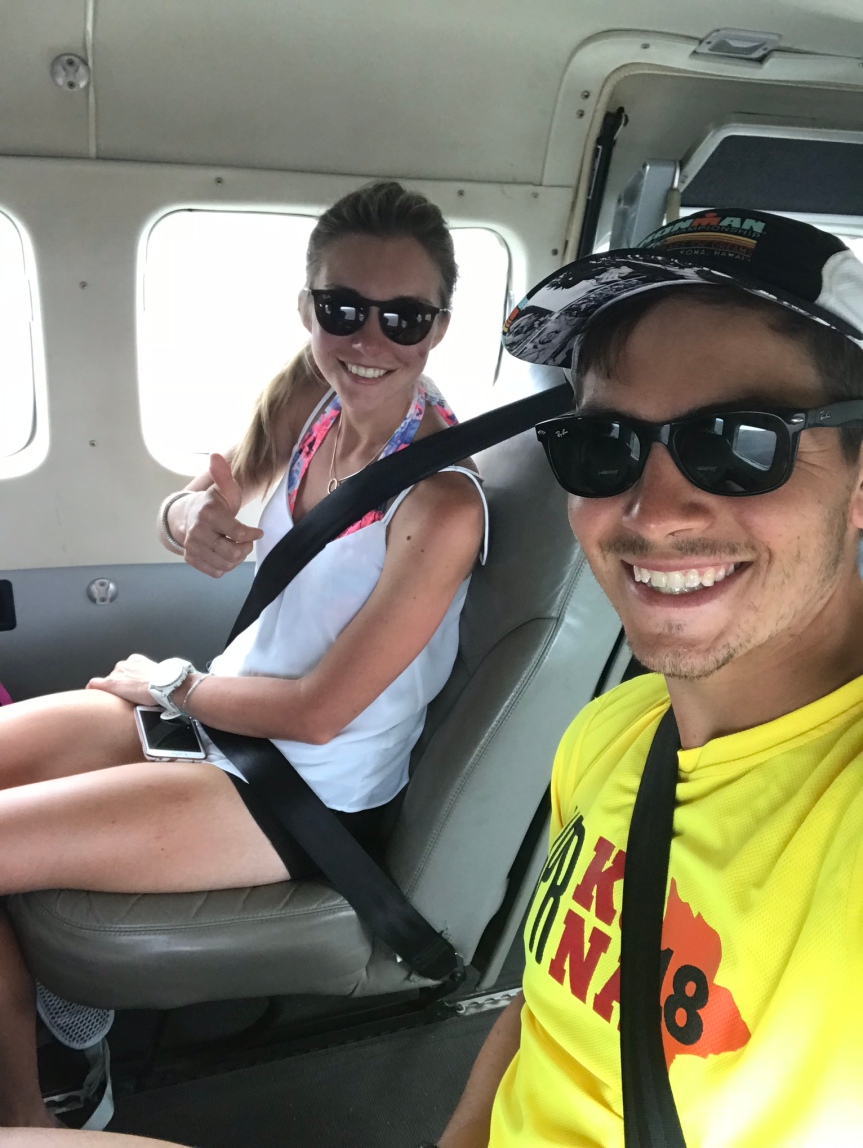 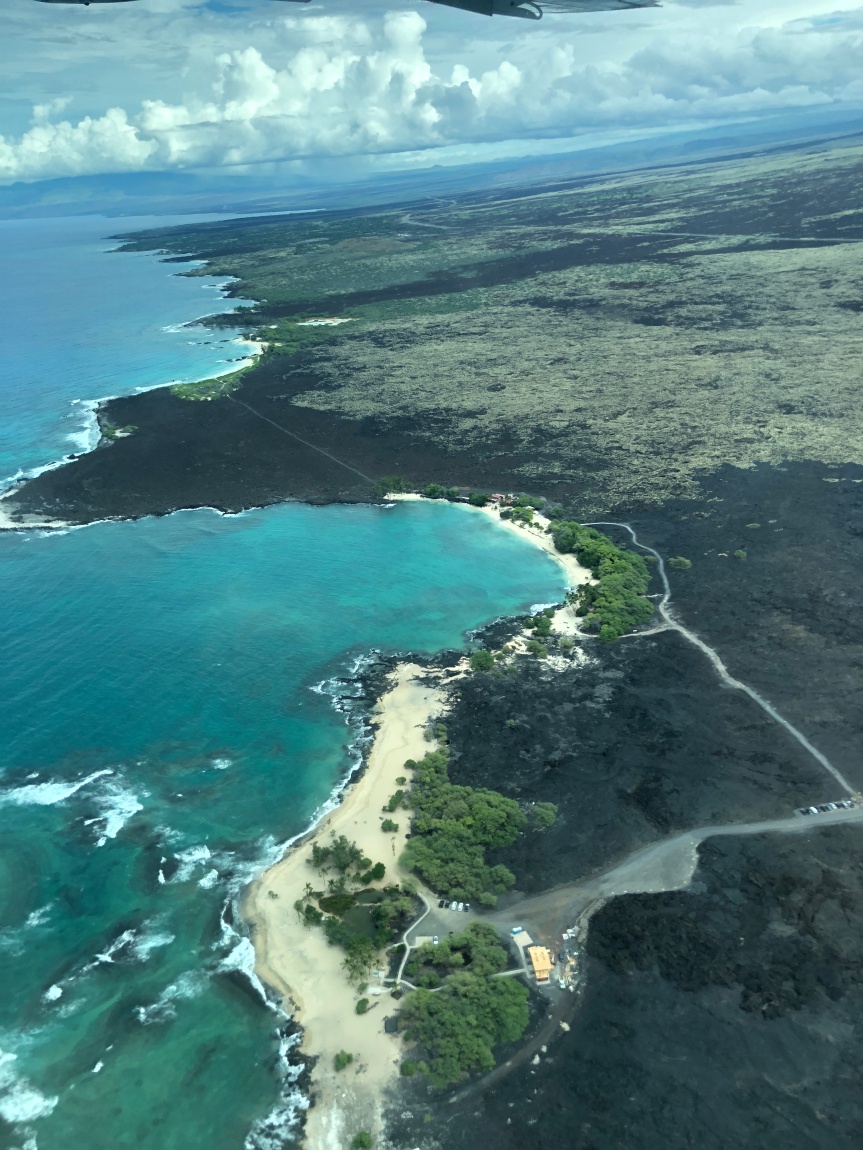 The only fly in the ointment was that we’d left our last beers back in Volcano, thinking we wouldn’t be able to fly with them, due to the standard airport regulations. Imagine our crushing disappointment when the check-in guy said ‘you can bring as much liquid as you want, it’s important to keep hydrated.’ Oh well – I’m sure they sell plenty in Maui. Hic.

One thought on “Kona – The aftermath”