March already? Crikey. Pancake day has gone, colleagues in the office have already given up on their lent targets, and runners everywhere are starting to realise that the spring marathons are just around the corner.

Quite unbelievably, someone told me that I needed to blog more. No, it wasn’t my Mum, she doesn’t count. So I thought a quick update and recap of me barrelling around Woking with a flat cap on and a flag attached to my back would be in order.

Two weeks have passed since Wokingham, in which time my shoes haven’t come undone once. Classic. I’m still completely undecided on whether I’m a runner or triathlete, which has led to me doing an awful lot of running, supplemented by a couple of bike sessions and regular swimming technique work.

The plan on whether to actually ‘race’ the London marathon is also still up for debate, with the only certainty being that I’ll be on the start line, most likely in a pair of swimming trunks, much to the horror of pretty much everybody I know. Katie’s hidden them somewhere, thinking I don’t know where they are, but I do. 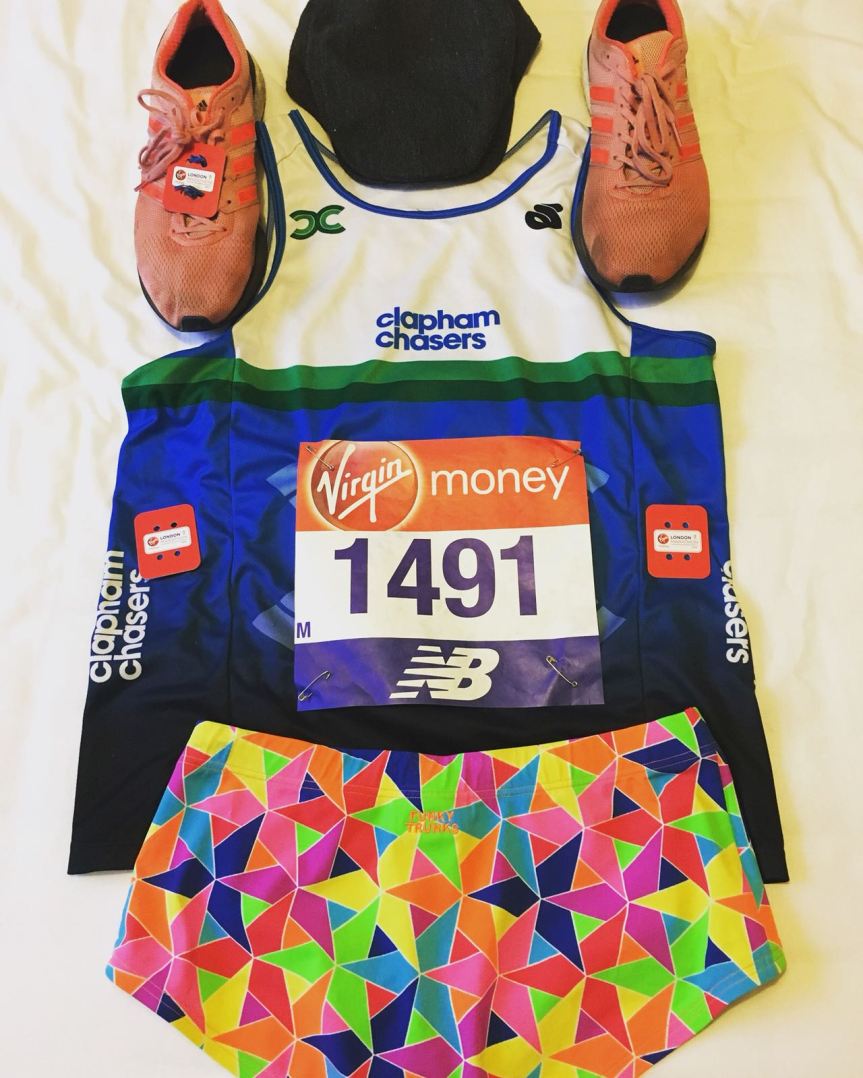 Last weekend saw me make my Race Directing debut, as I donned the high-viz for our clubs annual running event, the Thames Riverside 20 miler. Quite miraculously, the event ran without a hitch, and people seemed to genuinely enjoy themselves. There had been a fair amount of planning involved, but no one could have foreseen some little scamps turning up the night before and tipping over our portaloos. Thankfully, they had yet to be used, and we were able to hoist them up and get them back into action.

It’s always nice to give a bit back to the running community, which nicely segues into this weekends adventures – pacing at the Surrey Half marathon. This was the 4th time I’d made the trip to Woking for the race (2015, 2017 and 2018 reports here), and always look forward to going back.

Following an underwhelming blast around Richmond Parkrun the previous day (18:18), I turned up amidst a mild hurricane at Race HQ – the place all the celebs hang out these days, Woking Leisure Centre. Tents and advertising hoardings were flying everywhere, and if it wasn’t tied down, there was a strong chance it was ending up in Hampshire. With most worried about the effect the conditions might have on a potential personal best, I was more concerned that I might lose my flat cap mid run, and went off in search of some super glue.

Wanting to make sure I logged a decent ‘long run’, I set off for an 8 mile warm up, during which time I was subjected to 72 different individuals telling me; ‘The race hasn’t started yet mate’. Top bantz. Quick toilet stop; my favourite thing about this race is the number of loos they’ve got (other organisers take note) – before it was time to get lined up in the pens, flag firmly attached to my back. 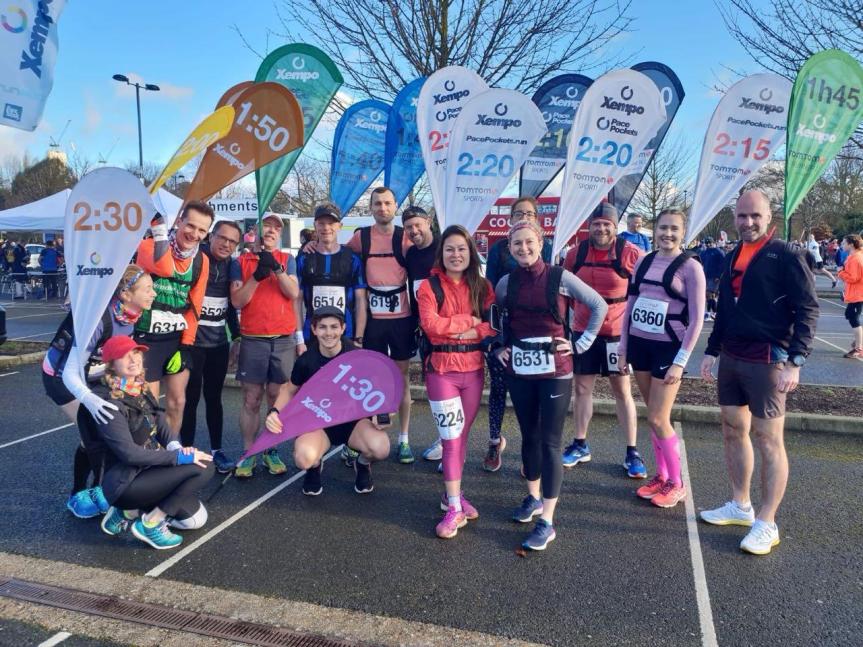 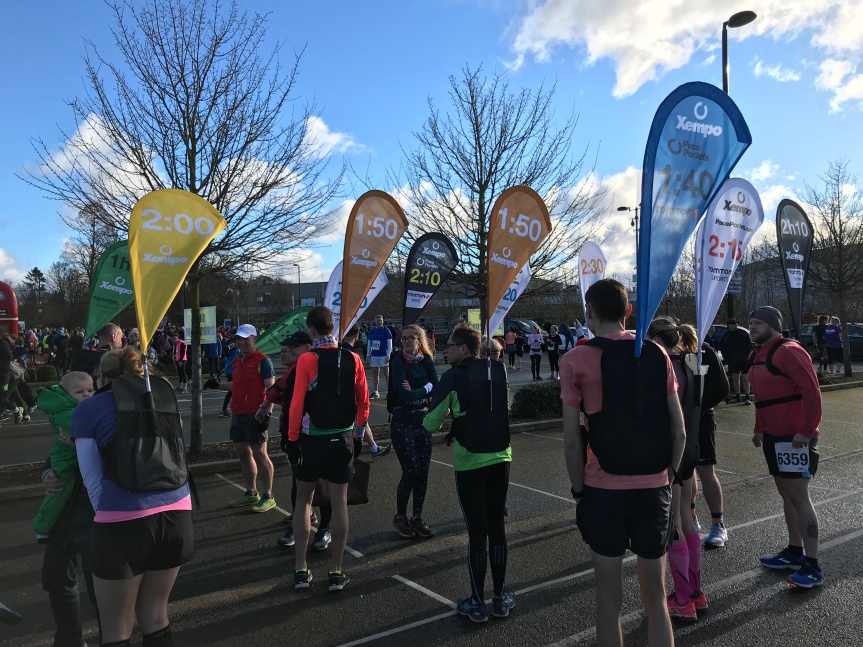 I fielded some questions in the minutes before the start, reassuring runners that I wasn’t going to set off at a completely unreasonable speed, before stopping at mile 6 for a quick cuppa, falling behind pace, and sprinting the last section to come home on time. Even splits (within reason) was the name of the game, and we had a good little group keen to play follow the leader.

My fellow 1:30 guy was pacer extraordinaire and owner of the entire pacing company, Xempo Dan, so the pressure was on not to c*ck it up, or there’s me never being invited back again. As always, there was a fair few Clapham Chasers representing, with a couple starting off in our little gaggle of runners.

We were unleashed onto the mean streets of Woking, with the first few miles into a stiff headwind. However, with lots of runners spread across the road, it was easy enough to shelter in the train and it didn’t feel too hard. Maybe that’s because I’m just really short.

I quickly fell in to the required pace – there’s always the slight doubt in the back of your mind that you might not be able to keep to it, for one reason or another, but thankfully today all seemed well. Despite knowing that there’s a fair few people planning to follow you, for some reason it’s always a fright when you glance behind and there’s what seems like a small army following your every move.

We continued our jaunt through the Surrey countryside, spotting loads of familiar faces on the long out and back section between miles 4-8, with Chaser legend Andy Maud charging away from the field on his way to a brilliant 3rd place finish. If I wasn’t pacing, he’d have probably been demoted to 4th, but we’ll gloss over that and say well done mate.

Dan and I were cajoling the troops along, offering some motivational chat, and generally having a great time. I tried (and failed) to take a selfie, nearly dropping my phone in the process, which would have been trampled on by the stampede behind me. After smashing my phone in Brighton during the marathon 4 years ago, you’d have thought I’d learned my lesson by now, but clearly not. 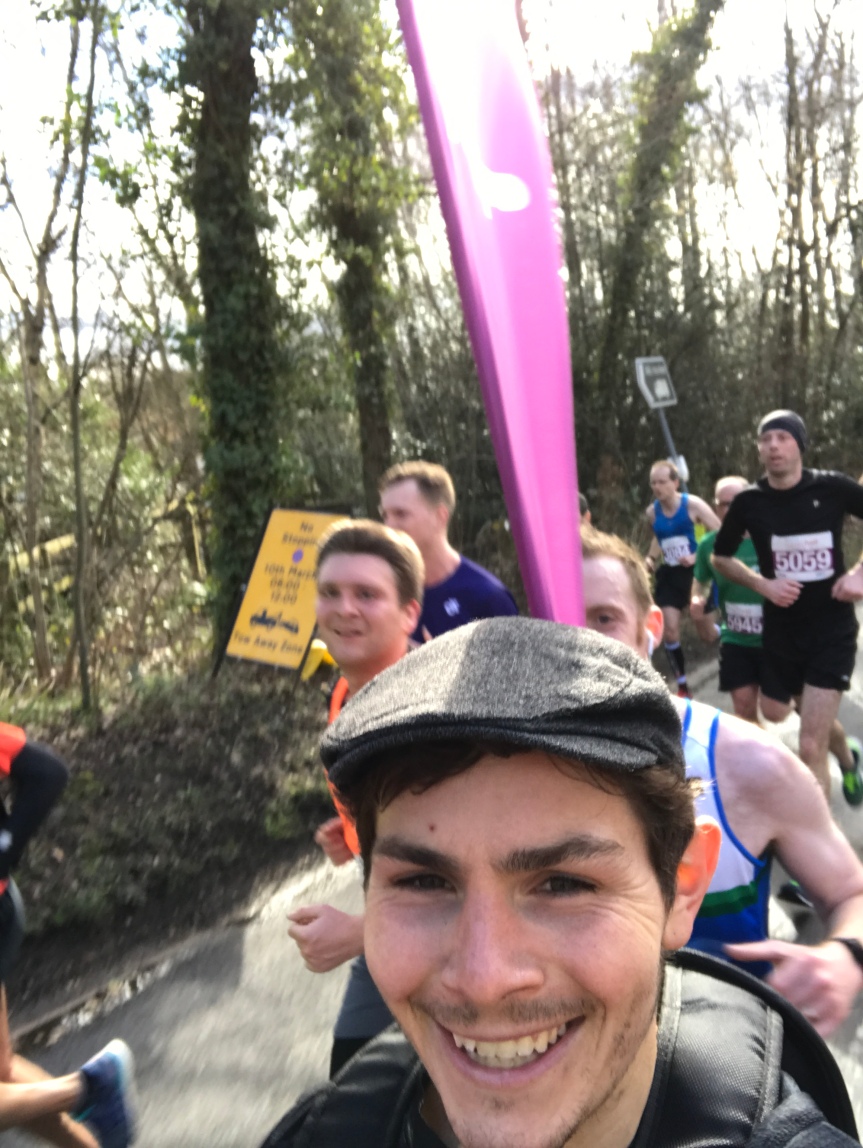 The chatter always dies down in the closing stages, which I think is when the role of pacer comes into it’s own. Whilst everyone around you is concentrating/suffering/fading away, it’s time to really hammer home the encouragement and reel off some good reasons why slowing down is not a good idea/not an option.

The last two miles were spent trying to get as many people to the finish in under 1:30 as possible, falling short of actually physically pushing them forward along the road. Looking people in the eye, you can tell they’re hating every fibre of your being at that point, but as soon as it’s over they’re overcome with happiness and gratitude, so it’s all worth it at the end.

After crossing the line in a pleasing 1:29:45, I was apprehended by the guy on the mic and quizzed about what it took to be a pacer, and asked what training I recommended people who were doing their first half marathon should do. After stumbling through a few answers, I was released and shared a few hugs with some of the pace group, who were all understandably delighted with their efforts.

I claimed all my free swag, before adding on a few more miles to make it a properly decent mornings work (25 miles), which bumped me up to 100 miles for the week – solid. After that it was time to get home, get my feet up, hoovering up plenty of food and a couple of beers.

One thing that always makes me laugh at the end of races, is when people seemed to be amazed and always asking ‘you didn’t run in that hat did you?!’. I think I’d be even more of an idiot (if possible) if I ran to my bag immediately after the race and shoved it on my head, or even worse, carried it around in the waistband of my shorts. It doesn’t slow you down, I promise..

It was a big weekend of running, with loads of mates doing the ‘Big Half’, and it was inspiring to see some impressive times being logged. Incredibly, none of their shoelaces came untied. I must have bought a dodgy pair of trainers.

Next up is this weekends Reading half. I’m currently undecided on whether to ‘race’ it or use it as a decent training session. I might even wait until the day of the event to make a firm decision. I guess the first target would be a Reading PB (1:21:01), but if I decide to give it a nudge it’s all cards in for anything under 1:16:53.

Let me know if you’re going to be at Reading – it’ll be good to see some familiar faces.